Furry and Bara Content on Itch.io: A Story of Data, Algorithms, Reports and Traffic Referrals

You probably didn't notice it, but about one and a half week ago Itch added a "Bara" tag to its list of suggested tags. And earlier this week they added a "Furry" tag.

This post tells the story of why and how that happened, and why that is important if you are making something like a visual novel with gay content like we are.  This will be another dev log that should be of use mainly to people making their own visual novels, we'll show some cool data.

Let's look at the data.

...And let's talk about tagging, algorithms and numbers!

As of today Minotaur Hotel has had 1.720 downloads on Itch.io and we estimate an additional 880 across different download links we offered (Mega.nz and Google Drive.) It's good to note that the last option had a head start, we took a few days to set our Itch page -- still, Itch outperformed it. It's impossible to know for sure how many downloads we got in total but we aren't too far from 3.000 -- pretty good for a 0.1 build released not a full month ago. But what matters here is that, so far, Itch.io has generated the larger slice of our downloads.

Here's another relevant piece of information: so far Minotaur Hotel's page has been viewed 8.800 times. Below we have a breakdown from where those clicks came from.

As you can see it turns out Itch is pretty good at bringing traffic to your game, which isn't surprising since it has about 200.000 games and who knows how many users. So, while Itch can be convenient as a link to send to potential players/customers, the truth of the matter is Itch brings in players by itself. This, of course, raises the question of how to optimize this process. Now let's look at a final piece of data setting up the stage for what we really want to discuss. 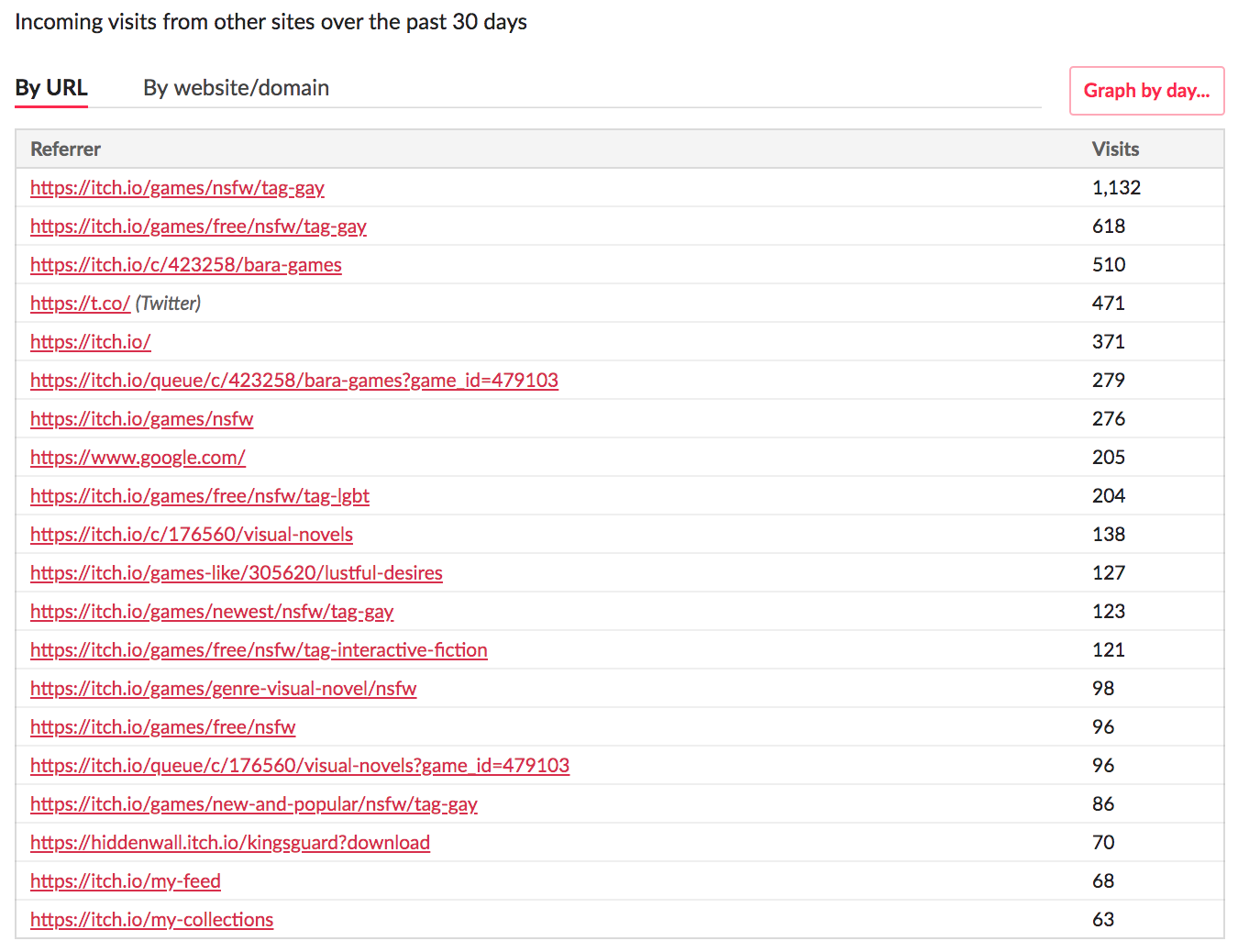 This is the breakdown of the top 20 sources of traffic to our page. I want you to take a good look at it, try to figure out a pattern before going ahead. What I'm gonna do is break down all the lessons we got from this data, which will

Ok, what does this all mean?

1. When you publish a game on Itch you get to pick a genre (in our case Visual Novel) and up to 10 tags. There's a very long list of suggested tags -- stuff like "Platformer", "Mystery", "Male Protagonist" and "Gay". Those are descriptive words/sequences you can associate your game with. This may seem like an innocuous, inconsequential thing but make no mistake; it's huge. Look back to the list above -- the "Gay" tag is by far our greatest source of traffic. This became evident quickly after we published the game. Users can pick a category and see what games are in it, and it turns out the "Gay" tag is intensely searched by users. (You can probably guess a few reasons why.)

2. "Gay" is the best. LGBT and Interactive Fiction are good, they do bring in some clicks. Broader tags like "Mystery" weren't so great.

We also looked at what other similar games were using in terms of tags. Maybe they had this whole thing figured out already, who knows? Our biggest finding is that, well, yes but not really. What we saw was that many games used "bara" and "furry" as tags. But there was a problem: those two terms were not among Itch's list of suggested tags. This is bad, because it means users are less likely to successfully search it as it doesn't show up in the auto-fill.

Now, this is the moment where we need to talk about a feature of Itch.io. It has an algorithm that figures out similar games and groups them together -- if you download a game you'll be shown a list of similar games and you can also check those by clicking "Related games" on a game page's upper right corner. We don't know for sure how the algorithm works but we concluded by observation it uses tags to some extent and, of course, it must strongly base itself on user behavior. Wouldn't be surprising if it uses the user-made collections too. Now, going back to the "bara" and "furry" tags, we had the hunch non-suggested tags probably didn't play a strong role in the algorithm -- at least not as much as the suggested tags.

So, you see, this was clearly a sub-optimal situation. If those two tags became official we could see them being searched more and we could see the algorithm more accurately recommending gay visual novels to the players who would enjoy such games.

Now, how would we go about getting those tags approved? By contacting the admins, of course. We figured they'd be open to the idea if we made a strong case for it. It may come across as overkill in retrospect but we wrote a 3-page report on why "Bara" should be made a suggested tag and the response we got was a very polite, very quick approval. Our report hinged on one essential fact: there were already about 30 games that used the "bara" tag and the user-made Bara collections could contain as much as 130 games. That was a strong argument.

About one week later we suggested the "Furry" tag -- which had about 230 games already. Similarly, we got a positive response.

Mind you -- while this was happening we got in contact with the Orange Juice Dog, the team behind Nekojishi. They had a piece of information we could never have gathered by ourselves. Check out their referrers: 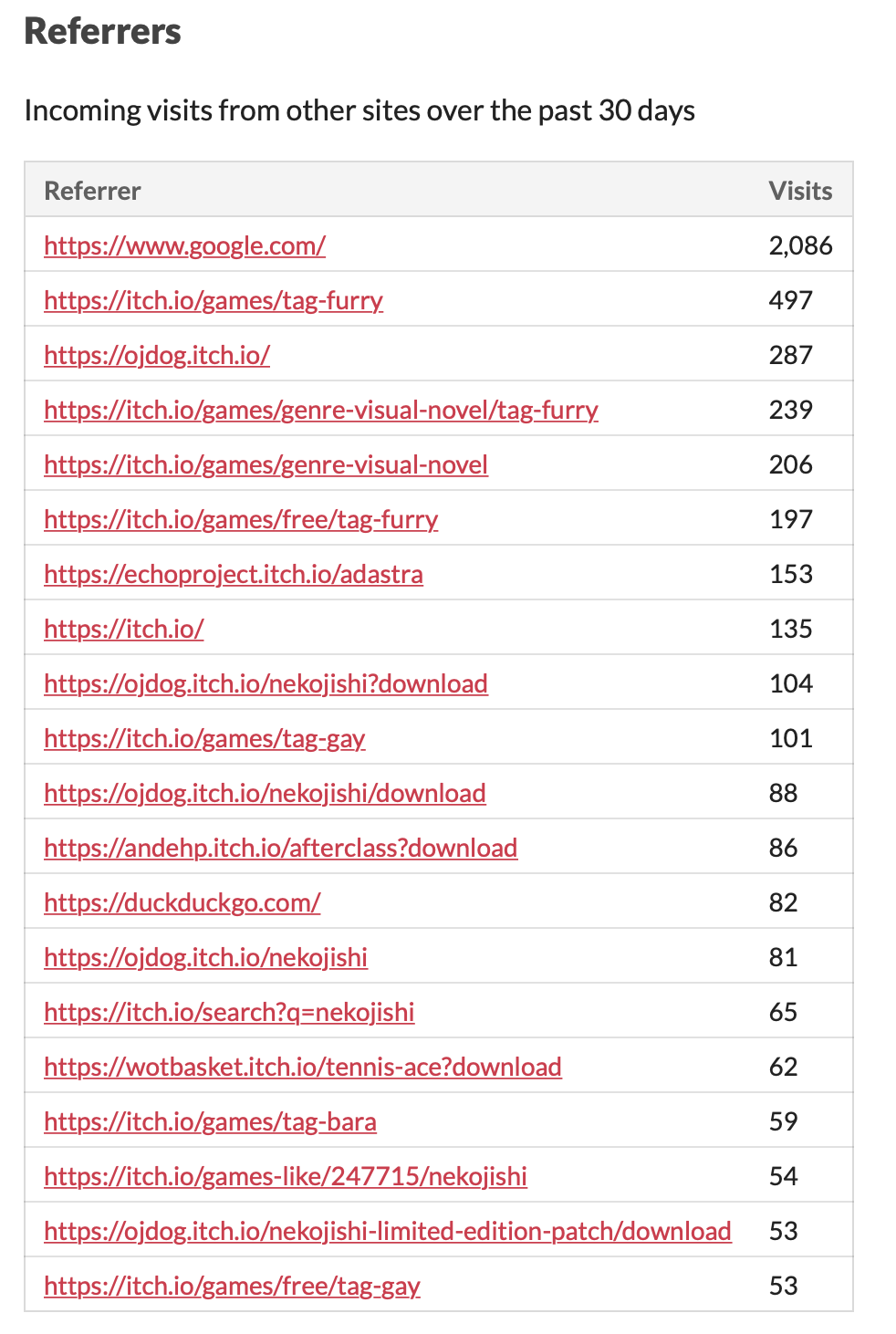 They've been using the "furry" tag for quite a while, but hadn't used "Gay." This screenshot is recent, after our initial conversation last week they added it. Note how "furry" had already been a relevant source of traffic before it became an official tag and "Gay" is climbing up quite quickly. Do note how Nekojishi also gets traffic from other visual novels via the recommendation algorithm -- Adastra, After Class and Tennis Ace.

A thousand thanks to the Nekojishi team. We couldn't have figured this out without their help. Do check out their latest game, Beek - Familiar Spirit, it's available on Android and iOS.

The fact "furry" already brought in traffic makes us think it may start bringing in even more now that it's a suggested tag. But, regarding the recommendation algorithm... if you check our Related Games page you'll see that "Bara" and "Furry" are now being used as part of the recommendations. Hopefully this means it will improve how it suggests games!...

So, now I want you to look back at the top 20 referrers to Minotaur Hotel. Now I'll reveal a very important information:

a. After "Bara" became a suggested tag we saw a massive increase of clicks coming from user-made Bara collections. We can't know for sure if those two things are related but it went all the way up to 800 total clicks in about a week!

b. Ever since the "Furry" tag got approved we saw that the recommendation algorithm was redirecting people who downloaded Kingsguard and Lustful Desires to our page. Again, no way of knowing for sure those two are related but before "Furry" got picked we never had another game's page as one of our top 20 referrers.

Tags are important. If you are making a visual novel with gay content: "Gay" brings in thousands of clicks. "LGBT" and "Interactive Fiction" are worth it, but not as productive as "Gay." "Furry" and "Bara" have potential and may make a difference in making sure your game is recommended more often by the algorithm. People also often search for NSFW games, that brings in a lot of traffic too!

More lessons? Yes! If your game is similar to ours then you are probably missing out on traffic if you are not using the "Gay" tag, and on recommendations if don't use "Bara" and "Furry". Assuming your game does fit those tags (we are not supporting dishonesty here) there's really nothing to lose by adding them.

Is that all? No! We are still studying which tags may work well beyond those we mentioned. We are testing out the "kemono" tag, which is used in Nekojishi, as we want to verify if it brings traffic and if it may have potential to bring together more games. Right now I'm curious about the Dating Sim, Yaoi, LGBTQIA and "BDSM" tags -- if your game uses any of those and you'd like to contribute please do post a reply here indicating your interest. And if you figured out relevant, well-used tags that may apply to gay visual novels please do let us know.

That's it for now. If we achieve more findings we'll make a follow-up post summarizing everything. Stay tuned!

I can't wait to see how much the Bara and Furry community will grow thanks in part to this small change. I can see this as having a ripple effect in the coming future. Good job and Thanks!

Hopefully it will make it easier to connect players and developers. Small changes and improvements do stack, maybe it will make those projects more viable in the future! At least that's what I hope.

This was quite the insightful read @__@

Your collection has been an immense source of traffic. Thank you for that. How did you get so many people to see it?

Edit: just clarifying, the two bara collection  links that brought us together more than 800 clicks are yours. That's not something I clarified well.

woooah seriously? Awesome haha glad it helped but i have no clue tbh *shrugs*

Well then, if you didn't go out there posting the link hundreds of times then the most likely explanation is Itch started showing your collection to loads of people on their front pages. In which case, congratulations and thank you :)