Howdy! A while ago we started a little side project to bring some attention to one of our writer's work and to give ourselves a simple product to work while resting from Minotaur Hotel 0.3. We've mentioned it a few times on Twitter, and today we're making it available in a Beta stage for everyone who's following us, as a sort of thanks for your support. Having you with us is highly appreciated, and we hope you continue enjoying our stories. 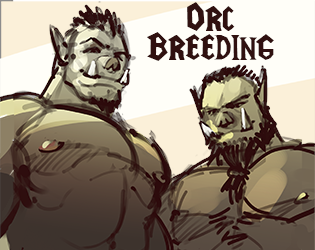 Some of the men in these stories are more than willing to be taken by — or take — these muscular, sweaty, green-skinned brutes. Some need a little convincing to enjoy their captivity. And some are bound, humiliated and made into their captors’ playthings. But rest assured that all these men experience the hard, raunchy, homosexual rutting that helps to perpetuate the orcish tribes.

In Orc Breeding you will find plenty of explicit gay content, you must be 18 or older to play it. Contains various fetishes (which are indicated at the start of each story), so reader discretion is advised.

If you want some behind-the-scenes information, we have some fun things to say. This little project contains seven stories written by Nemo0690, the writer responsible for Kota in Minotaur Hotel. Most of them were written a while ago, and reading them last year gave me a very strong push to start writing the first draft of Minotaur Hotel. The stories were very kinky — they aren't everyone's cup of tea — but I admired what Nemo did by just writing the uncompromisingly sexual stories he wanted. That left a mark in me, that freedom. It's no understatement saying that without these stories MinoHotel would never have been written.

It's been a full year since then, and it feels so appropriate to repackage these stories today to offer them to a larger audience. And working in this project was such a joy — all the writing work was already done, evidently, so the effort in this stage went into adding some goodies and converting it into a polished framework we could put on Itch.

We aren't far from a full release, but we thought it would be worthwhile to do a short Beta to gather input on how we can further polish the game. Meanwhile nanoff and GigaSaddle will work on a few more illustrations we can cram in. So after you read it we would be grateful if you could take a minute to fill the feedback form at the end.

So yeah, thanks everyone and have a nice weekend!

I didn't play it yet but it reminded me of a dream where a orc asked me in marry. I end lost in the forest into a gnomes village losing my conscious and woke up in his tent been intro to his grandparents.

I just read the first story...🗿my oh my🗿that was some of the most well written smut ever🗿Will these stories be like “just stories” or are there plans to make this into a game/visual novel of any kind?

Nemo is thinking of writing more stories for Orc Breeding, so we might get new chapters in the future. But no, we don't plan on turning this into a bigger project.

I just wanted to give a heads up that when I go to the page, the game isn't available for download because after clicking install it says "invalid game". Looking forward to it nonetheless, and I'm a huge fan of all the work y'all do!

Thanks for the heads up! Just a question, are you using the Itch.io desktop app?

Hi! the same error happened on my pc. I am using google chrome. Btw love all the work you do so gotta try this! xD