It's been a couple months since we released 0.4, which was meant to be a shorter (but still substantial) update while we work on the next build, which, to really make an impact, requires a lot of content to be delivered at once. We were very busy in December, and January was a hectic month for all of us, but, a great deal of progress was made.

The biggest piece of news is about the "Ruthless Route." Nemo and Kangarube have put a lot of time into it and we are happy to announce that its content is written and currently in the editing stage. As of today it has over 43.000 words of content, which is basically a novel on its own.

Just to be clear: yes, this is the ending for the Ruthless Route. Compared to the main branch of the story (which still has a lot of ground to cover), this one ends prematurely.

For those unaware, if certain circumstances are met during a playthrough (roughly speaking, if you send Asterion to the valley two or more times) then you will end up with a very different ending on Chapter 12. Asterion's little concert turns sorrowful, let's say. If you got that ending then that save file is on the "Ruthless Route," which leads to a different branch of the story altogether.

Since the start it's been our belief that, if we want choices to matter, we need to provide the players with a meaningful chance to deviate from the story — even if few will do it. But we didn't want to write a whole second version of the game, that would be unmanageable, excessive and, to be honest, it's not a subject we take joy in writing. So our plan is that the "Ruthless" content would end early.

Now, the fact that few ever check it does give us the opportunity to spread our wings and go for more experimental ideas, which is at the core of the ending to this part of the game. We did a deep dive on the mythology. Overall we know few will check it, but for those who do it will be remarkable.

For the "Main Branch" of the game — the regular Chapters, which focus on the player character and Asterion — we decided to reorganise the chapter structure we'd go with for Build 0.5. Originally we were thinking of putting all the content in two very big chapters, but recently we realised that breaking the content we had written into 4 medium-to-big chapters would make it flow better and improve our workflow.

To give a little insight on how the sausage is made, as you must know it takes time to write and edit — but it also takes nanoff a significant amount of time to go through it and implement into the game. Changing the expressions, moving the sprites, preparing any extra effects... If we leave him to do all of the game's content when we finish writing and editing everything, that can take a long time to put in the game.

By breaking the content into more manageable chapters we got Chapter 14 100% ready, so nanoff went ahead and implemented it. Now he's working on some sprites.

For the next week or two our focus (as in the writers) will be on editing, so that we can get the next batch of content ready for in-game implementation. The Ruthless Route is in full editing swing, Chapter 15 is nearly done — just have to write one or two more scenes.

Chapter 16 is about halfway done, most of its important scenes are written but we need to stitch them together. Chapter 17 will be a shorter chapter that serves as the climax of the build — we haven't started on it yet.

On the background I'm working on the Hinterlands content, and with Kangarube's help we are doing some research about Mongolia, which leads us to...

Build 0.5 is when Minotaur Hotel's management systems come in full swing. You already got a taste of exploration and R&D in 0.3, but it was in the context of juggling two plot goals. With 0.5 we take the baby wheels off let you tinker around to your heart's content.

Exploration remains the same, as it already has a sizeable amount of content to it (you can find more of the clay slabs) but R&D gets injected with juice. As soon as 0.5 starts you'll have a few projects you can pick from to improve the hotel, which right now includes building a gym and improving Asterion's bedroom. Awoo's been working on this content, and also on the guests you can recruit.

Yes, guests. During Build 0.5 you'll be able to recruit a few people to join the hotel's staff. Some show up at the hotel on their own, others may need a little push to find their way there. Some will gladly take a job as soon as they step foot on it, others require some attention before they are willing to dedicate time.

How many new staff members you get will depend on your choices. At the very least you will have three more by the end of 0.5, at most you'll have four — unless you picked the Arts background, which raises that up to five. In total Build 0.5 will have seven potential staff members. 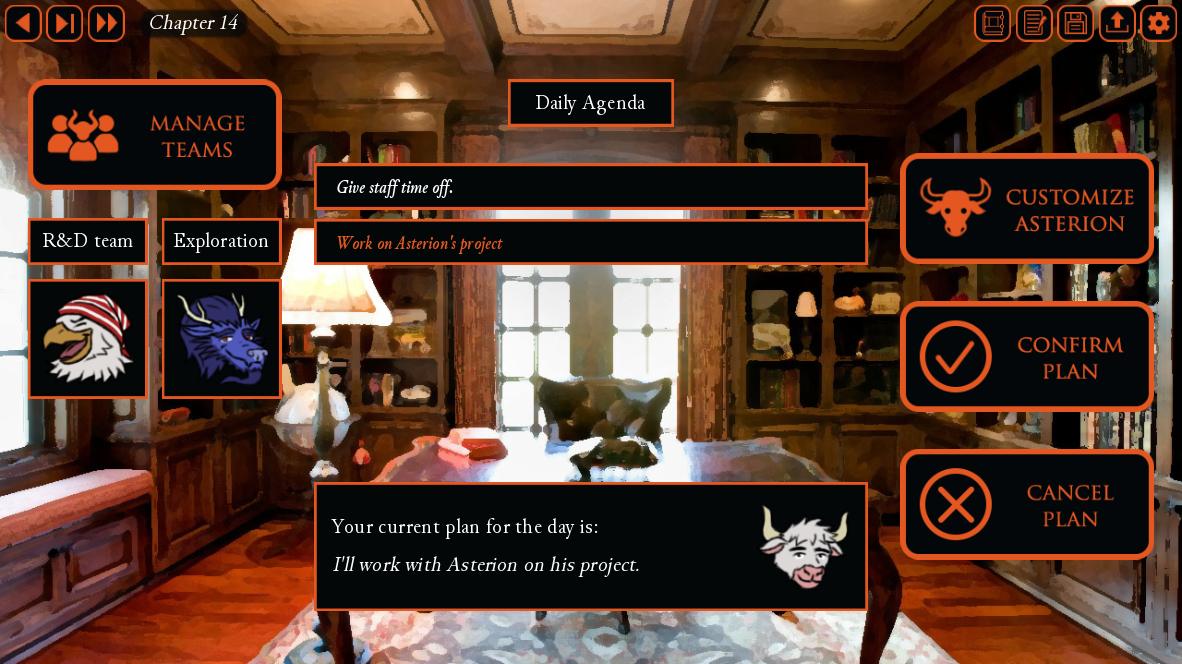 On top of that, you will now be free to decide how to spend your time, which includes being able to hang out with guests/staff. This will reveal a bit more about their stories and the world of Minotaur Hotel, as well as giving a boost to their stats. And if Asterion is available, you can help him with a little personal project, as well as a couple other sidequests.

Overall, Build 0.5 will be the moment where all the mechanics blossom and come together. There'll be a lot of side content to explore if you want. It's not set in stone just yet but Chapter 14 to 16 should each give you five "turns" to make management choices, one for each weekday.

Now, speaking about guests in particular, lately we've been preparing the groundwork to write the content for two characters in specific, and we could really use some input.

"Khenbish" (this name might be temporary, it's not set in stone just yet) is one of the new guests that will join the hotel in the next build. A very brief pitch for this character is that he lives a traditional lifestyle in rural Mongolia, which clashes with some of his aspirations. We decided on this nationality after doing plenty of research on Asian countries and concluding that this was the best fit for his character arc. However, we bumped into a bit of a problem: it's difficult for us to consult with Mongolians, given the relatively small population of the country. The best we got was asking a couple of questions to a friend of a friend, which helped a lot, and we did plenty of independent research, but we would appreciate some extra help getting this character right.

The second character (name and sprites not finalized yet) will be an accountant from a still undecided sub-Saharan African country, whose family used to do business with the hotel before it shut down. We have plenty of ideas for him already, but to really cement and design this character we'd like to consult people from the region, as many accounts as possible.

Our current idea for this guy is to make him a djinn (with the appearance of an anthropomorphic hyena); however, djinns and hyenas are more strongly associated with Northern Africa. It's not a giant dealbreaker, since a geographically displaced myth would definitely not be a first for Minotaur Hotel (considering Storm is a Brazilian minotaur and Luke is as American as apple pie). We imagine mythological creatures are not immune to globalisation. But we are aware that Africa is frequently misrepresented as a homogenous culture, so we're very open to suggestions. Preferably something that can be turned into a cute anthro husbando. That would help.

If you know people from these regions we could consult this with, we'd highly appreciate it.

As usual, no tentative release date yet, although we are definitely over halfway done with this one. We hope this is the last really big hiatus for this game, since after this build we will be able to make small updates expanding on side content while the next chapter of the main route is still being worked on. Sorry for the long wait!

I really like this game, by the way, only version 0.3 is available on Android or doesn't it support other versions?

The latest version is 0.4.1 and it's available for Android too, just download it from our main page.

I've downloaded it, but why is the display a little different, to be honest I'm a little confused :(

You don't need to make him a djinn, then. You could make him an animal that is associate with religions such as Vodun and Yoruba. You can make this second character a practioner of one of these religions and they can talk more about their views of the spirits and divine beings their religion venerates.
Those religions are as old as the greek religions and the cult on their spirits are still strong and faithful. It could be a new view on how the old gods aren't completly dead.

And that will add a whole new pantheon and related animals. Since the bull that is the alternative form of Yansa, from brazilian candomble, to the white serpent of Damballa, from haitian vaudou.

If I can recommend a Sub-Saharan cultures, I can tell of the Zulu people. They have a decently extensive data about them online, importantly MADE and kept by themselves. There's also the San that roam the Kalahari Desert. Their civilization is arguably the longest lasting one, 30,000 years, which is potentially quite interesting for a character. The caveats is that there many misconceptions about them in "official" researches, also, due to their unique lifestyle, they are functionally unreachable.

While I can't say on the character's species (maybe a African wild dog or something?) I'd like to cautiously advise against him being a Djinn. If there's something that differentiates Northern and Southern African cultures it's the religious import. North Africa's peoples's had major contact with Islamic culture while South got most of it's religion from later European colonialism, ergo Christianity (not disregarding native beliefs, however those are poorly documented). Though I can't attest to it, having a mythological figure rooted in Islamic tradition like the Djinn being put to represent Southern African cultures could be seen as tone-deaf.

I know you'll do a good job regardless, so I await whatever decision you make.

Amazing work Minoh Crew!! I'm so excited to and can't wait to play more of this game keep up the amazing work!!!

Boar boy gives me  some serious Botan vibes. The resemblance is uncanny, especially when it comes to expressions and frontal pose.

And since the MC and Asterion are married now (well, they did exchange vows and wear bands now) maybe we'll see the romance blossoming in this next update.

Mmmhmm this is THE gay, hehe, good work minoh crew :)