Hello, everyone! February came and went so quickly. It’s honestly surprising just how quickly, but I guess that comes with being a shorter month.

This was a very busy month for the team. Some of it was due to stressful real life obligations, but some of it was good. nanoff’s been focusing on some difficult exams, meanwhile I started the Master’s program I always wanted to do and my nephew was born, so that’s kept us a bit busy. Despite this we managed to get some good progress into the game and we are picking up the pace again.

First and foremost, we'd like to showcase a little project we're very proud of: the Minotaur Hotel Wiki!

The Wiki has largely been led and written by Matydos, who you might be familiar with from our forum. He's responsible for most of the work that's gone into it, we couldn't have asked for someone so engaged with the game and its writing.

We think this will give a nice space for the readers who are playing "detective" with the mythology in the game so far, while at the same time making it easier for everyone else who isn't as interested to follow along. Notably, the pages often have a space for the mythology of the characters and a section where people can put their theories. Hopefully people will have some fun!

Full disclosure: we are letting the community lead this, but we're the ones hosting the website. Our reasons are:

If you dig around a bit you will find some places that are rough around the edges (I'm still doing some work on the Privacy Policy!) but thanks to Maty's tireless work this project has come so far already. And if you want to contribute you can just create an account and jump right in! I hope a lot of readers can work together and have fun while doing it.

As of a week or two ago, the Ruthless Route is essentially complete and implemented. There are still a few assets requiring some work, but not many.

To celebrate this occasion we did a private playthrough of the game with a few of our testers. Suffice it to say, the reactions were very good. I don't want to get into details, so as not to spoil it, but we very proud of Nemo's work. We really think this might be one of the most remarkable sections of the game. 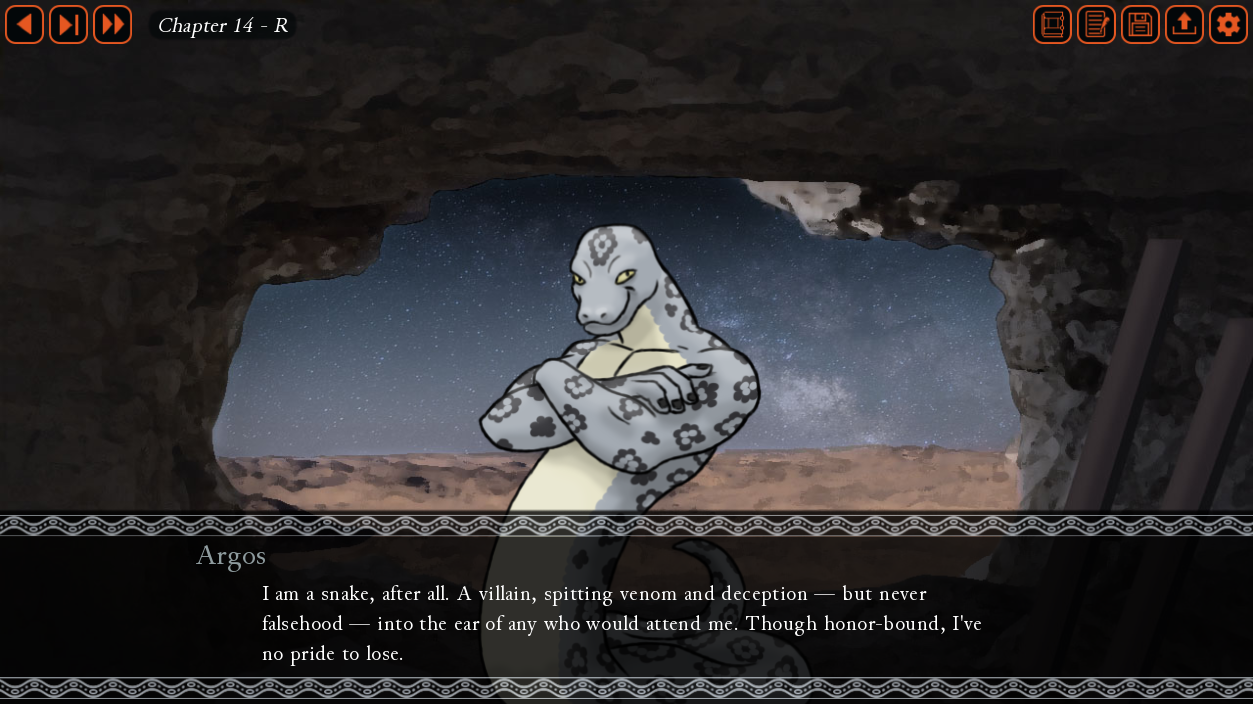 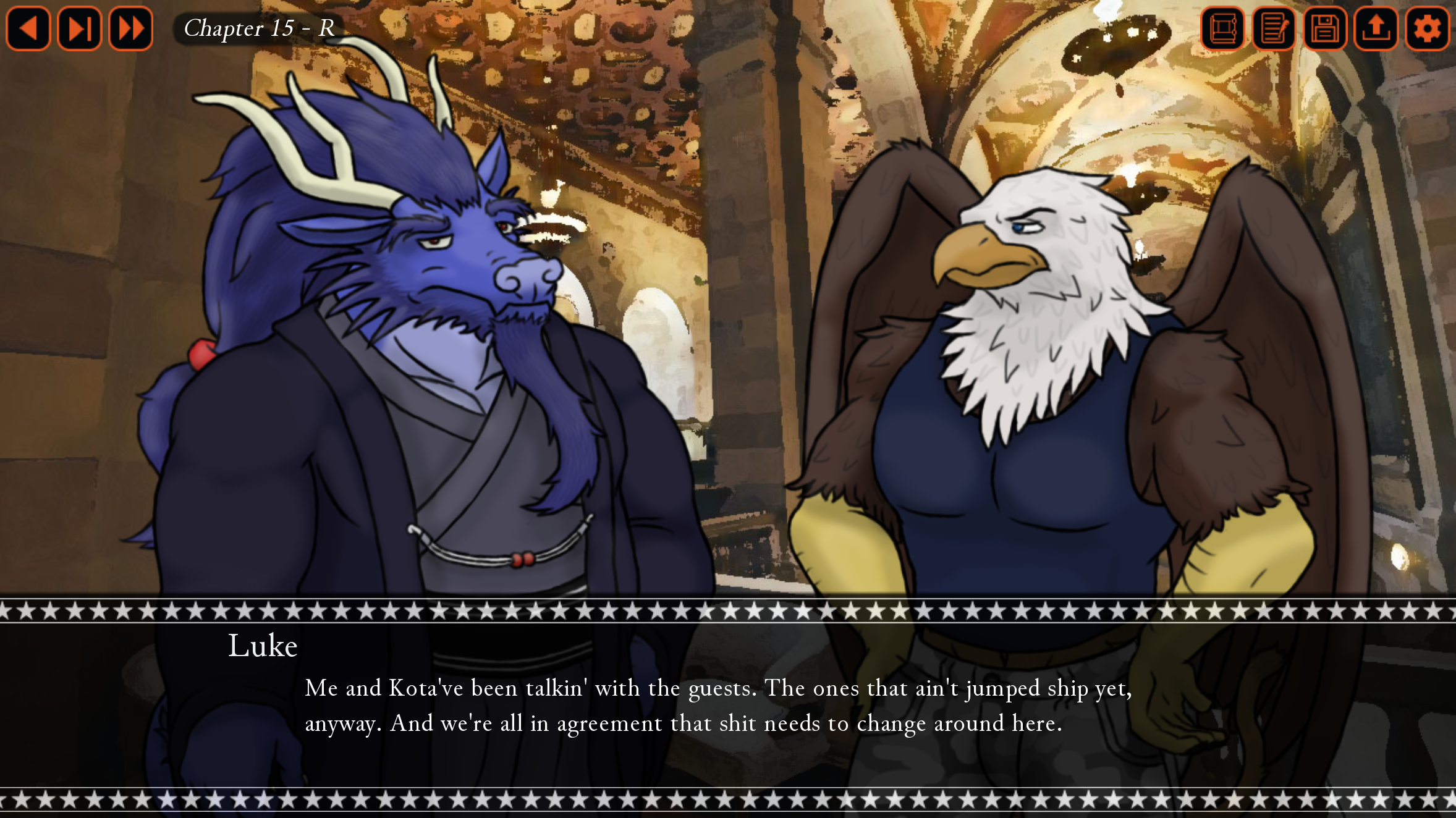 Mind you, putting all of it in was a gargantuan task in and of itself. It required new assets, so nanoff was quite busy, and the editing of all this content is not a simple task either.

Now, even if you don't intend on checking the Ruthless Route, this piece of news is relevant to you because we no longer will be juggling two profoundly different story branches. The game has, in one fell swoop, become much simpler and more straightforward to produce.

The piece of content I'm busy with right now is Chapter 16, which is the last stretch before the climax and conclusion of Build 0.5. As I said, we all were busy with real life obligations during February, so our word count was low. That said, this period was not unproductive. Spending some time focusing on my Master's was an experience I thoroughly enjoyed and it really refreshed my creativity, and this thinking time allowed me to process some of the player input we got since Build 0.4 came out.

So, Build 0.4 might not have been a lot of content compared to our usual modus operandi, but looking back I think releasing it as we did was quite likely one of our best moves so far. It really sparked a lot of discussion about the game — in particular some excellent constructive criticism (special thanks to all the amazingly thoughtful comments in our forum).  The feedback helped with planning and adjusting the next pieces of content in the game — and now we come back to February.

So, I am proud of Chapters 14 and 15. I think people will enjoy it a lot. But this extra thinking time I got in February for Chapter 16, I believe, will make it another big highlight of the next build. Again, not going to give details as not to spoil things, but I think it will have all the things people like the most in our little game and significantly progresses Asterion's character.

We are getting there. It's gonna take some time, but we are doing it.

No! We do have some neat things going in the background but it's not yet the right time to unveil them. Again, while February was a comparatively less fertile month in terms of raw word count, it was not at all unproductive and opened the way for a lot of good stuff ahead.

That's it for now! And don't forget to check the Wiki!

I'd like to ask the devs something regarding this game. I think that minotaur hotel touches on a subject that is interesting. The subject of a half man half bull who has to live in eternity living basically as a slave to humans and they are pressured into torturing him in a way. But what I don't find interesting at all are the choices given. You can be a good person to him or bad, which is fine. but those choices aren't engaging or interesting. Asking me whether or not I want this innocent person (spoilers: i know that the story right now is hinting that Astorion might be lying, but regardless, i don't think there is a crime worthy of eternal enslavement, end spoilers) to be tortured or to be treated as equal isn't an interesting moral question. Maybe we can do things that are meant to help but end up harming Asterion in the long run.

I'm not a writer and my opinions should probably not be taken seriously, but I really love this game and I would love it if it keeps on improving. The main star of the story isn't just Asterion, at least to me, it's helping him and nourishing him into a healthier person. the best parts of the story were the beginning, seeing this broken almost dead person and reaching out was a highlight and I hope new updates will have more of those highlights.

Hi! Thank you for taking the time to write your views on the game. It's very much appreciated.

Maybe we can do things that are meant to help but end up harming Asterion in the long run.

To a certain extent the game does have that, and the effects can be quite profound. If you are too touchy during your first encounter with Asterion and suggest you give him a bath he won't take it well. If you botch the first encounter with Argos, later Asterion will have a panic attack and you can mismanage that. Argos' encounters all have ways in which they can be managed better or worse, and those choices will have repercussions on the next build that affect Asterion.

As for your point about the choice of treating Asterion cruelly or nicely, we are aware that a lot of players don't find that engaging (we actually have numbers on this thanks to the surveys we do). Still, our perspective on this focuses a lot on the story of Minotaur Hotel as a whole. I don't want to get into spoiler territory, but if the player treats Asterion badly they'll end in a special scenario (the "Ruthless Route") and Build 0.5 contains the ending for that. Once that piece of content is in the game, I hope, people will have more knowledge to understand what's the purpose and the themes here. In other words, the "cruel" choices themselves weren't meant to be compelling on their own — in truth what, we hope, will be compelling is the story as a whole, how the characters and events will change based on these decisions, so on.

Anyhow, despite going a bit on the ruthless content... You said your favorite moments were when the MC and Asterion, shall we say, connected and reached out to each other. We'll have a lot of those in the next build, so I hope you'll like it.

The game is great, but could you add Russian, I just don't know English. And because of this I can't play.

Hi! Thank you for the interest in our game. Unfortunately, our focus is on getting the game done as soon as possible, which is already a big task given how small our team is and everything we want to do with the game. Translations are very time consuming, and no one on the team speaks Russian. Sadly, it's not feasible right now.

But then, if someone would just happen to come around and start working on a translation, you wouldn't be outright against that, would you?..

We wouldn't be opposed to it, not at all! We are always very grateful for all the kindhearted help. In fact, if someone were to do a translation we'd establish a channel of communication and send some material to help. We'd also make sure the translation goes in the official game as opposed to being something that has to be patched.

We haven't talked much about it as to not raise expectations, but there is a translation underway for Minotaur Hotel. It's helping us understand just what we need to prepare to enable translators to do it. We'll have more news about that soon.

If you or anyone you know wants to translate the game send us a heads up so we can help.

Should I make a forum post or is there anyone in particular to get in touch with?

I'm grateful for this wiki, no offense, but the greek mythology part of this game makes me snore. It's not for everyone I guess.

That's fine, we know it's not for everyone. Still, rest assured we are packing a lot of content focusing on the MC's bond with Asterion, which we know is something all/most our readers are interested in.

Hey! As imagine you expect to use the Wiki more passively, I would love to hear about your experiences with it sometime. Don't feel like you have to, though.

Are you asking for feedback? So far, all I see is basic information and not much discussion or theory. It could definitely look better.

I'm excited for you wanting to get your Master's and the nephew being born!!! Keep up the great work and whenever you get the time we will be here to play more of this game!!

Congratulations on the nephew! Good luck on your Master's!

what do you mean by "before the climax and conclusion"? when do you plan on stopping production of the VN?

Sorry for the misunderstanding! Chapter 16 is the last before the climax and conclusion of Build 0.5 (which will be a rather brief Chapter 17).