Another month has passed. Let's take a look at the progress so far.

For starters, nanoff just finished porting Chapter 15 to the game — that’s notable considering it’s sitting at about 30k words. We haven’t playtested it just yet and, in fact, will do some edits here and there, but these moments are always very motivating. We get to see what was a long document turned into real gameplay with all the interlocking systems coming together.

It’s on Chapter 15 that you’ll have the chance to recruit one or more new staff members — if you picked Arts you get two, otherwise you get one. There will be three options to pick from, and as of two night ago two are written and about ready to be implemented in the game. The third one is outlined so I should get to it any day now.

Full disclosure: it’s possible to get a fourth staff member during Chapter 15, but that’s an optional side quest.

As you know, Build 0.5 will be big. It has the ending to the Ruthless route (already fully implemented) and the “Hinterlands" section (we’ll talk about those in a minute). But as far as the main story between the player character and Asterion go, Build 0.5 starts with Chapter 14 and ends on Chapter 17.

So… Chapters 14 and 15 are implemented. Chapter 16, meanwhile, is close to being done and being sent over to editing. Right now it’s sitting at 37k words but it’ll still grow some more — don’t be surprised if it gets up to 45k words.

I’m hoping that Chapter 16 will be one of the highlights for everyone who’s first and foremost interested in seeing Asterion’s character growing. All the preceding chapters — 13, 14 and 15 — kickstart a lot things in the big moo and it all culminates here, with him realizing a lot about his place in life and his own emotions.

So, while Chapter 16 is nearly done, Chapter 17 is mapped out. Now this will be a very special chapter but for entirely different reasons. It’s the climax of Build 0.5, for starters, but it’ll be quite a bit shorter than the other ones because this is where a lot of your choices will come together. This means a significant-but-manageable number of variations for how it goes.

So, let's put this all together on a handy table, shall we?

But that's not even half of it! Buckle down, the Mino ride never ends.

As I said previously, during Chapter 15 you'll have the chance to expand the hotel's staff. In total we had to write the introduction content for 4 characters. Here's how it's going so far:

Just as a refresher, here's how the guests look so far: 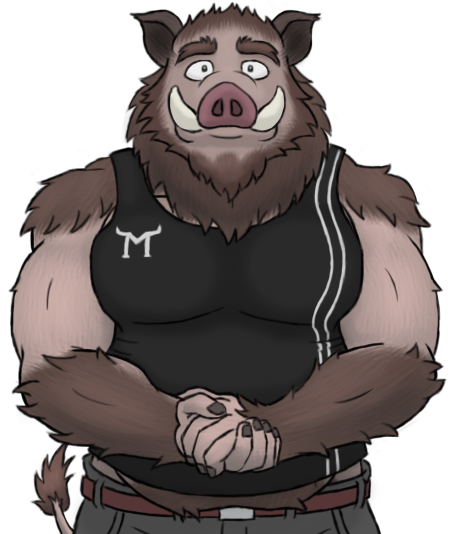 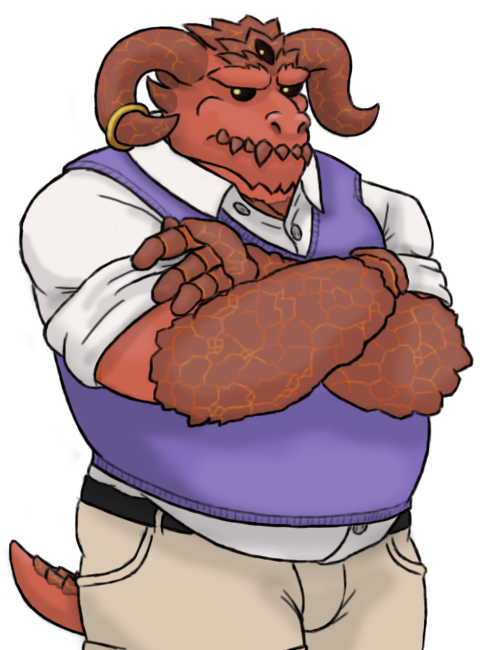 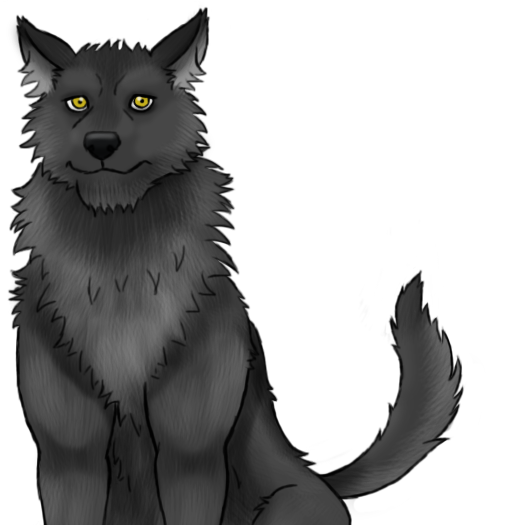 The latest addition to the bunch is this one, called "Themba" for now: 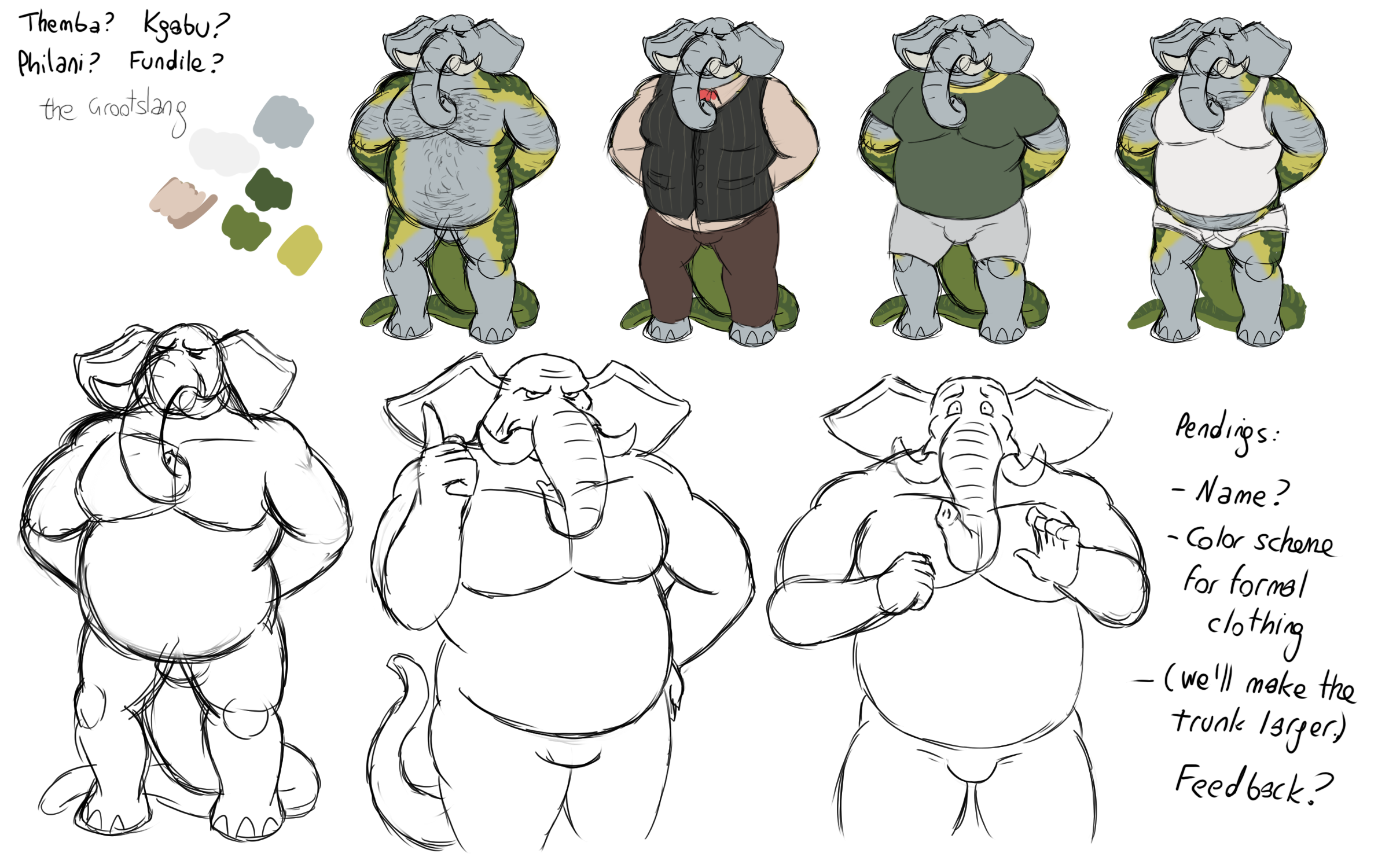 As you can see, Themba is the only one we don't have the final sprites for. That's because designing him has been a very tricky situation from the start.

Long story short, we just really didn't want to fuck it up. You know, characters like P and Storm are from Latin America and we went to great lengths to write that part of them well. That's easy considering nanoff and I are from LatAm. But writing a character from Africa meant a lot of research and reflection if we wanted to keep that level of dedication.

We really have to thank Zaggy Norse (who's writing a VN called Lord of the Manor) here, he gave us a lot of very solid advice and perspective. In no small part thanks to him we locked down the character's backstory and his species.

For now we are calling him Themba and he's a Grootslang from South Africa. According to the legend, the Grootslangs were one of the first beings created by the gods back when they were inexperienced with the act of creation. They were massive beings, half elephant and half snake, which were deemed "too OP" and were thus nerfed by being split into elephants and snakes.

But a few grootslangs survived and settled in South Africa, where they are associated with hoarding diamonds from the underground. True to this connection, Themba comes from a lineage of grootslangs who have worked in Asterion's hotel for a few generations as their accountants. One of their main tasks over the centuries has been to take the diamonds Asterion creates and discreetly selling them off to pay the employees.

Themba's introduction is already written. I think people will find him very interesting, he brings a whole different dynamic to the story because of his history with the hotel.

Now, I should probably add that while Themba's first scene is written, his design hasn't been finalised. We'll do another go at it soon-ish to try and make him hit just right.

Are these all the guests for now?

For Chapter 15, yes. That said a while ago we sat down to figure out how many guests we intend on implementing on the game and what they'll be like, so there's some work going ahead of schedule there.

One of the oldest character concepts we have is about a hydra called "Black". Long before Minotaur Hotel was a VN I wrote a draft for the whole thing and Black was one of the characters that showed up. He was one of people's favorites back then and an absolute joy to write for me.

While nanoff's been busy with, well, everything, I commissioned Eddio, developer of Killigan's Treasure, to design and make a simple character sheet for him. We posted some of the concept art on Twitter, but I'll go ahead and post it here as well.

Eddio is just an absolute joy to work with and his work with Black is phenomenal, I loved the design. He's also a mad beast who went above and beyond the call of duty... So, we commissioned him for a very small job but he just kept going and going. We didn't know how to stop him, or if it's at all possible to stop a rampaging force of nature.

He even made this little treat! 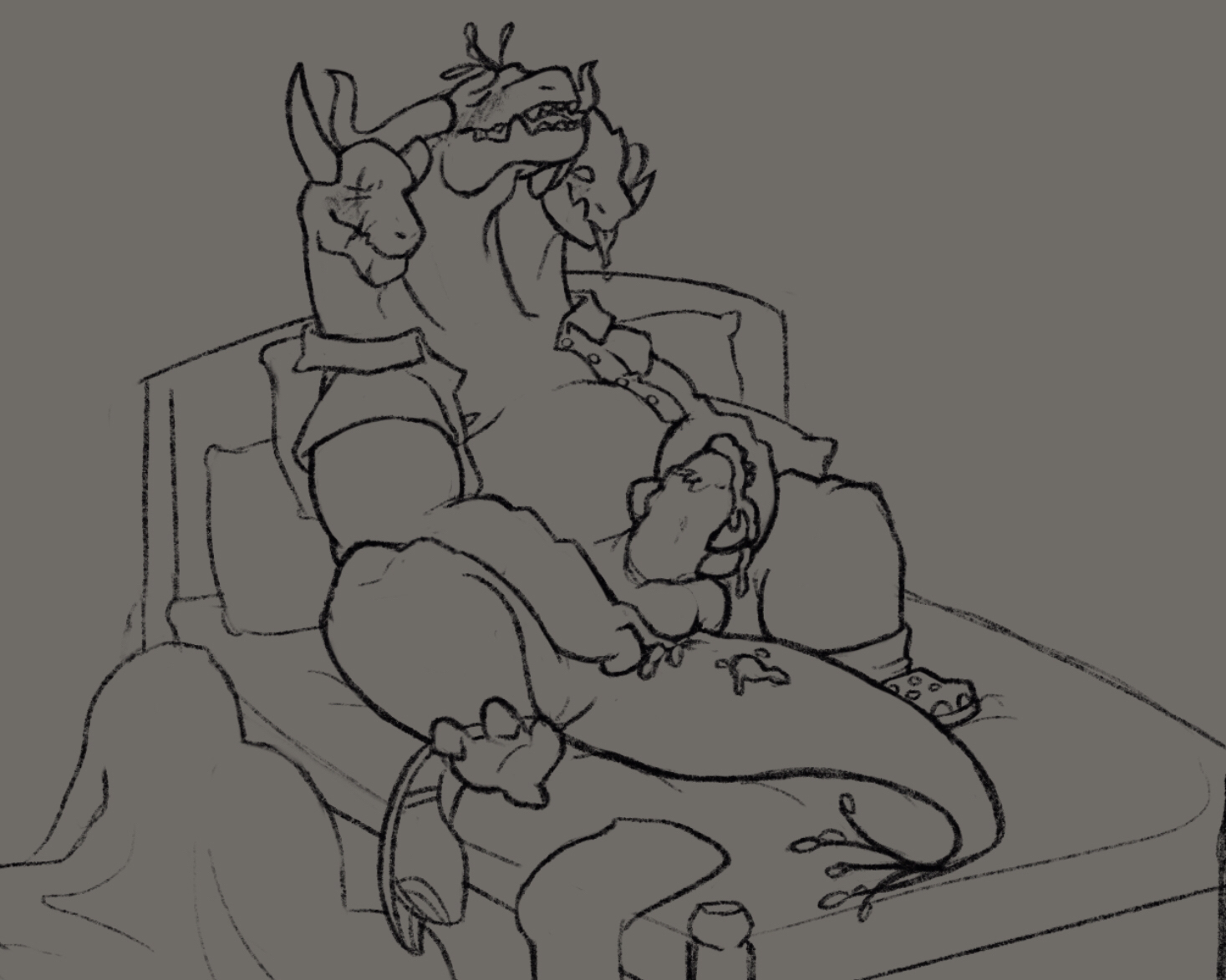 Suffice it say, working with Eddio was great. His art is great, he did a wonderful job in translating our very complicated complex, he delivered in a lightning-fast speed, communication was excellent. Absolutely top tier service here, if you ever want to commission someone I highly recommend him.

I should probably add that if you want you can commission him specifically to make more Black art (fun fact: we actually had someone asking about it.) If you want to do this you can just communicate with Eddio directly, no need to check on with us.

Just to be clear, we won't be using Eddio's sprites in the game because that would be jarring when side by side with nanoff's style. And neither will Black show up on Build 0.5 — it's too big already. Later on we might go back and add a way to get him as a staff member during the events of Chapter 14 to 16 though, we'll see how that goes.

Between each of the numbered chapters in Build 0.5 there'll be intermissions that show a bit of Storm's and P's search for the hotel. Our goal is to keep them short and snappy, the exception being the third section which will have some mechanics thrown in.

I won't say too much as to not spoil it, but you'll be able to control P and Storm as they explore "the hinterlands". The places you visit will show some neat things about how magic works in the Minotaur Hotel universe. There will also be a few mysteries to solve, if you are inclined to play the detective, and the opportunity to help Storm recover from his rough life so far.

The Hinterlands section can end in a number of ways depending on those choices, which will have implications back in the main story.

Here's a table of how it's going so far:

What about a release date?

As you can see we are progressing well but we still aren't ready to mention a release date. Most likely we'll announce it when everything is nearly done. Please be patient.

And now, to close off this gigantic devlog...

A few days ago Minotaur Hotel hit 50,000 downloads! Sadly we didn't prepare anything to celebrate because our efforts are all going into finishing the build ASAP. But hey, it's still a noteworthy thing we wanted to mention real quick.

That's it for now!

Damn, with as much ground as you guys have to cover it's a wonder you guys are progressing so fast... Also "A motherfucking wolf" looks like a 12/10 good wolf, would def pat

It is a motherfucking wolf in the most literal sense 😆

Well, as I said before, this is a high quality material. So I can wait for it, since I believe plenty that you people will keep the good work. (And could be funny throw the brazilian versions of the Chupacabra and Chupacu de Goianinha. Rsrsrs)

Amazing!!! I cant wait to play the new progress!!!

Ahhh shout out to you guys for working so hard! I am so looking forward to next build. I just know so much love and dedication was put into it. Take all the time you guys need, it's all worth the wait! And congrats on 50,000 downloads!

btw Black has my heart. He's just so ADORABLLEEEEE 🥺💛💙❤️

"which were deemed "too OP" and were thus nerfed by being split into elephants and snakes." they're lucky they didn't get ban like the dinosaurs were.

You have all been quite busy and made a lot of progress since the last report. Good work as usual, can't wait to see how the story will go. But do take your time and take care of yourselves.

I'm so excited to read about all the wonderful progress being made, and I'm definitely looking forward to being able to get back into Asterion's world. Thank you for all your hard work and communication, and I'll definitely be waiting patiently for build 0.5!

And congrats on 50k downloads, you deserve them all!