Nanoff here. Sorry for the delay putting this devlog out! It's been a busy week for us. Here's how the build is currently doing:

Chapter 16 is in a weird state where some parts need a bit of polishing, some parts are fully edited and implemented in the VN already, and a couple small scenes still need to be written. Right now it's sitting at about 55k words (more than our estimate of 45k), of which 36k have been edited.

For this build, Robert has both his intro and a small sidequest where you have some talks with him to recruit him as a staff member, both are implemented. Luke has 4 optional scenes to test the waters for the guest routes, where the player spends time with the guests to give them some development (and a stat boost).

Hinterlands 3 is a big boy chapter with plenty of branching paths so we've been writing it on/off for a while in small bursts, but we have plenty written for it already. Hinterlands 4 will be a short conclusion to the arc, so there isn't a lot of work left wrapping up P and Storm's solo chapters.

As you can see, we're beginning to see the light at the end of the tunnel! Writing wise, we just need to write chapter 17, wrap up the Hinterlands, and finish some scenes here and there. We're still not confident in a release date, that depends on how productive May is for us, but it's possible that late June or July might be it!

While the writers are busy, I've been implementing their writing in the VN and have been doing a bit of writing myself, mostly side content such as R&D and exploration rewards, some more comedic scenes and additional mechanics. 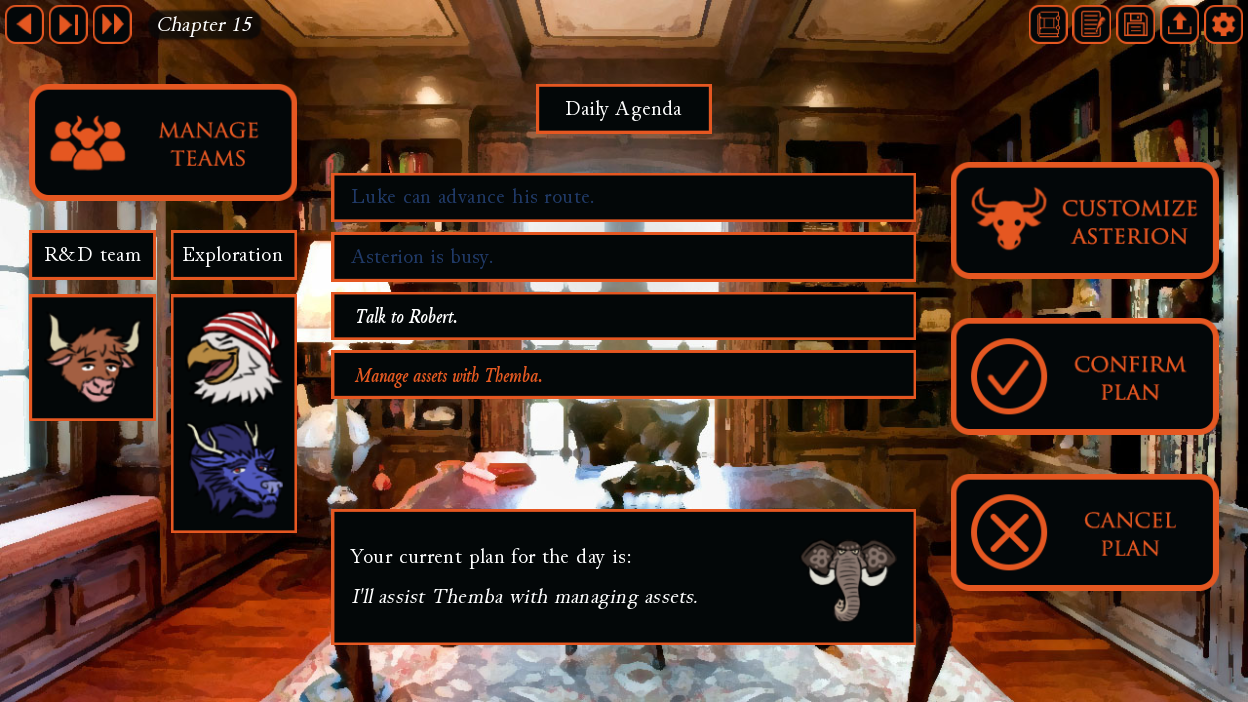 For example, if you get Themba as a guest, there's a small side task for the player character to do where you assist Themba with managing the hotel's financial assets and put all his points towards raw material production. If you have the Leader or Math background, you get some additional rewards from it. I wrote 7 short scenes that play at random whenever you do this to make it a little more entertaining and get some more insight on Themba as a character. 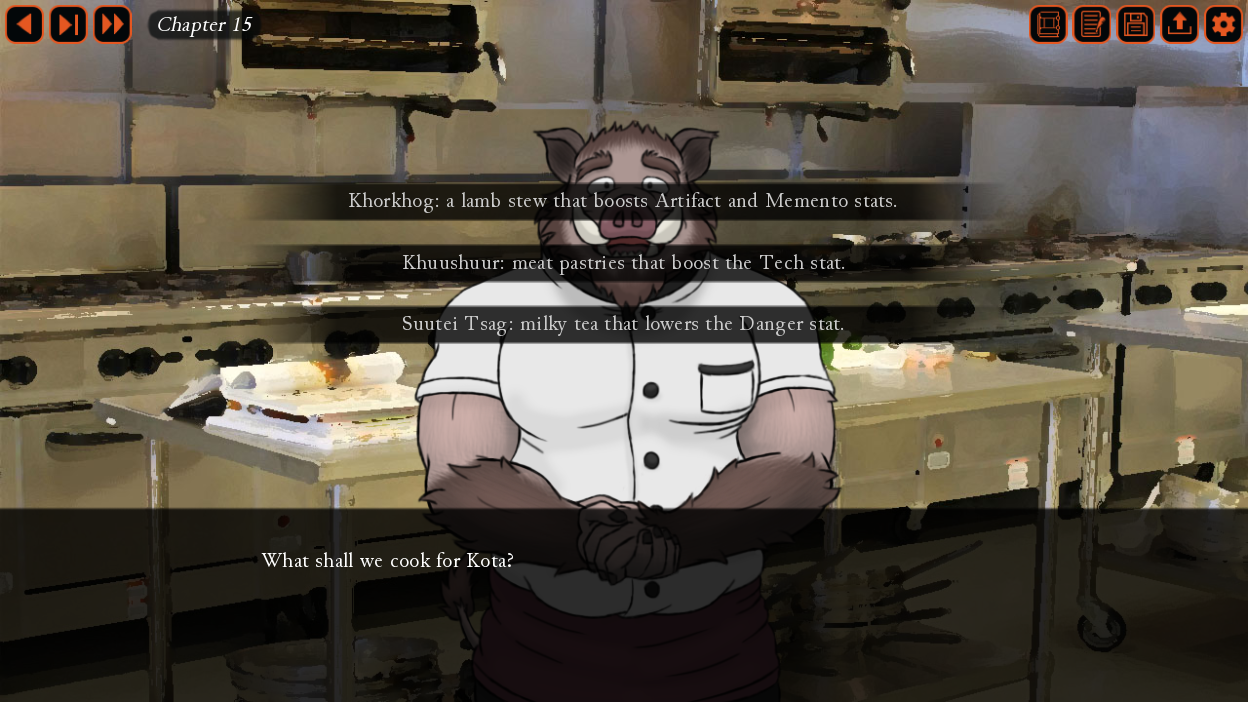 If you get Khenbish as a guest, you can cook different recipes for the guests that momentarily boosts their stats. It's helpful for completing tasks within a strict deadline. You can get more recipes as you advance his route, or in special events where Khenbish cooks meals for specific guests. Again, these all have small scenes attached. 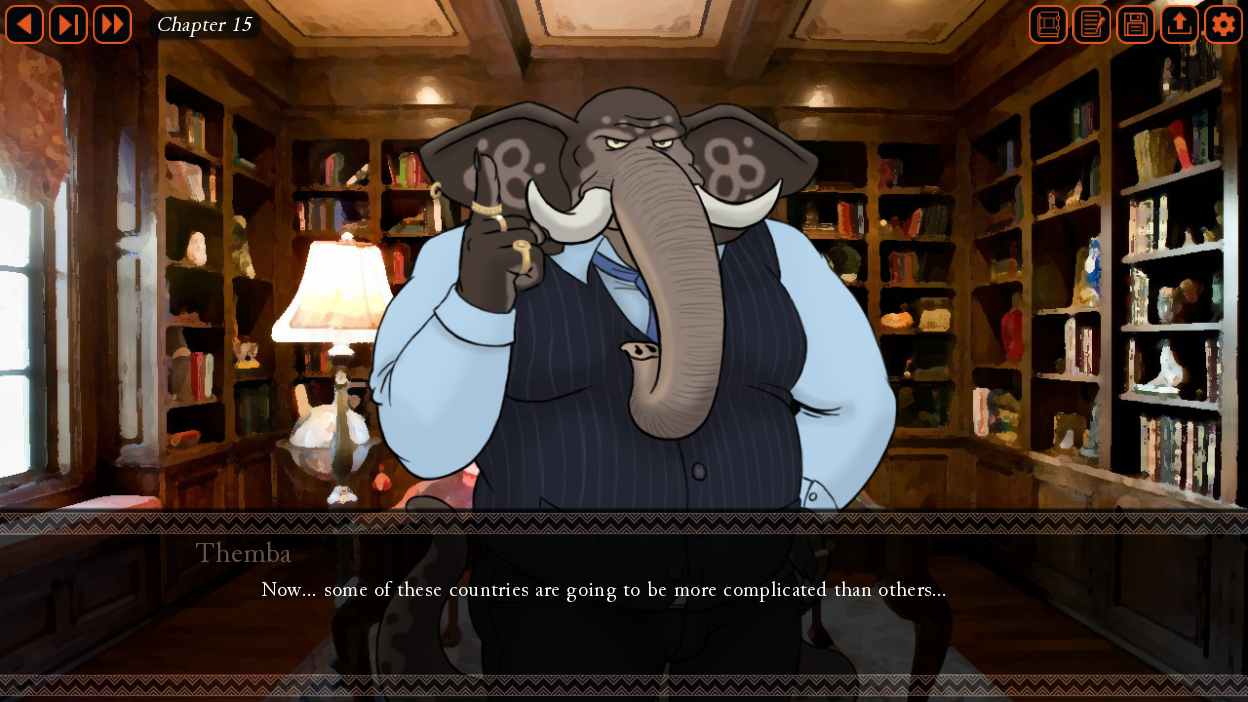 While we're at it, all of Themba's sprites are finished! I apologise to everyone that liked the darker design, but this is the one we went with. This was definitely the hardest character to design but I'm happy with the result and hope you guys are too. If we have the time, we'll implement an alternative colour scheme for him (a lot of people liked the darker version) that players will be able to see him in if certain conditions are met. 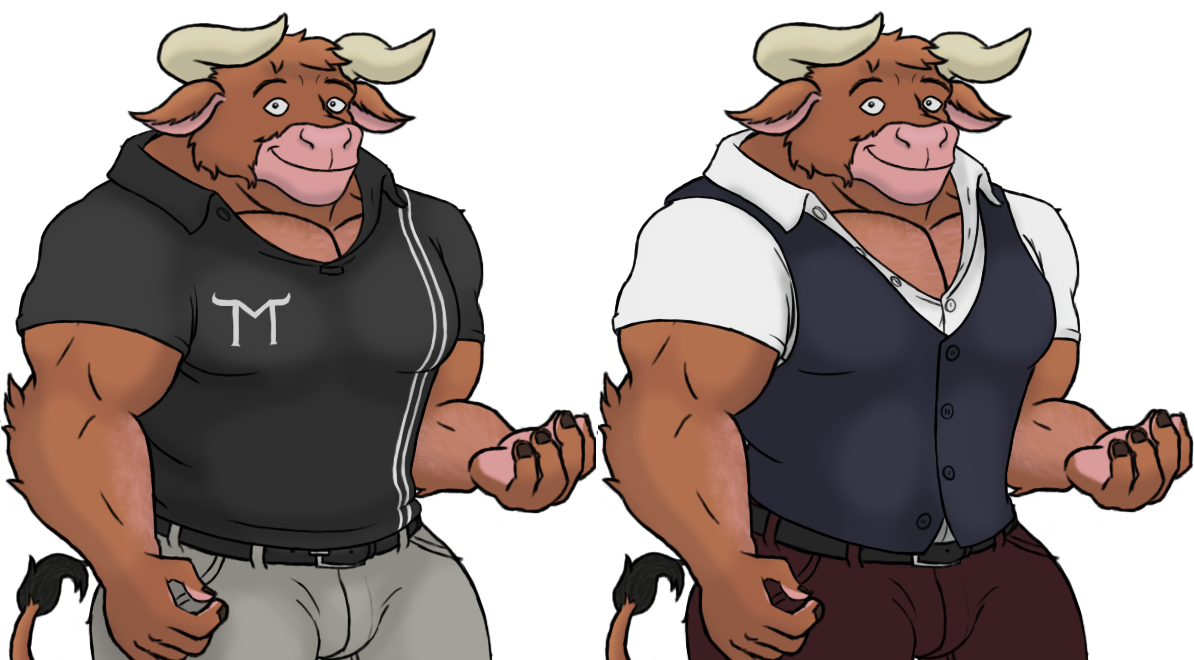 And speaking of sprites, some of the upcoming exploration and R&D rewards will unlock some of the outfits and accessories for Asterion that I made (has it really been over a year? Jesus Christ) so we can finally put those to use. For this build, I've made some additional outfits for him too, since he had too many accessories and not enough actual clothes. Duke it out in the comments: polo or vest?

So yeah, we made plenty of progress in April. The build is beginning to take shape, and seeing all the main story, optional content and gameplay systems all working in tandem is a real treat. I'm sorry for hyping you all up for something that still needs a couple months in the oven — but not too many months!

when's the next season or updating this

Is this available? For some reason I can only get to hinderlands 1 where the minotaur Strom and P the peacock meet each other then he throws the feather in the flame and becomes human? Then I get "and thats it!" the game tells me 4.0 and not 4.1 despite it saying 4.1 in the files. How would I go about fixing this if this is a problem, i've already deleted and redownloaded several times. help please.

We are still developing the next part of the story, it's not available just yet. So there's nothing to fix, you played all the game has to offer for now.

Vest. the idea of slowly unbuttoning the moo is very appealing to me

For everyone wondering, yes, both the vest and the polo outfits are going into the game. You have to complete an optional R&D project to unlock them, and which one you get depends on who is running the lounge.

Have another screenshot of Themba for your troubles. 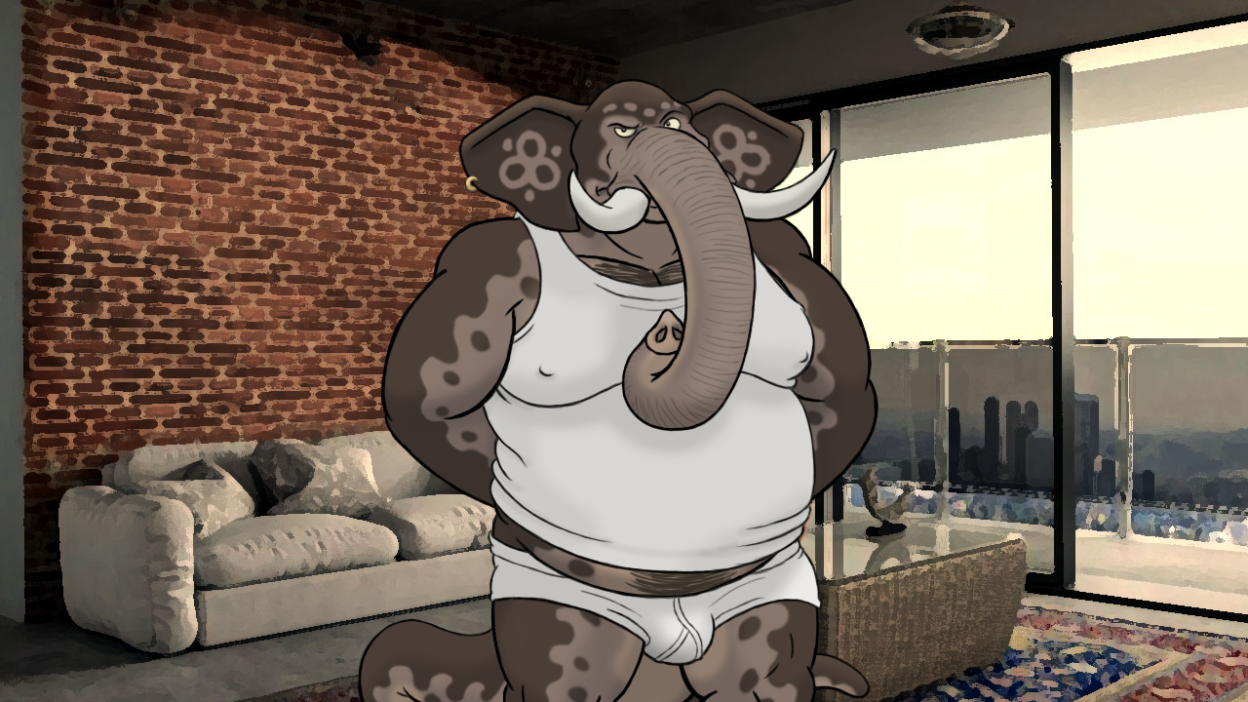 you're telling me i need kota to run the lounge for the moo vest :(

In response to the clothing: por que no los dos?

Looking forward to this. It's been a few months since I last played so I will most likely be starting from the beginning as a refresher. Seriously, I cannot compliment your team enough. Gushing like a fan girl.

The vest looks classy, but the polo looks nice too.

Actually, anything looks good on the moo.

That's a lot of work you got done. Nicely done Minohotel team. All the previews are awesome and I'm quite excited for the next build. As for the outfit, I like both, they show difference sides of the big moo. Though, I'd go with the vest to give the "professional hotel" look to Asterion.

Both are good but vest looks much to my appetite

i cant wait for this update, is going to be insane!

they both look good but I think his old outfit is plenty for formal wear, so I'm leaning towards the polo.

Thanks for all you do the updates are great!!

They both look great but I'm leaning towards vest.

Polo for sure...i like a man in uniform OvO