I hope you guys have been enjoying 0.5 so far!

This was a massive update, so regardless of how much QA we did before release, it was unavoidable that issues would pop up. We decided to put together an 0.5.1 update to address these issues, but we also let a couple weeks pass to collect your feedback and add a lot of quality of life improvements to the game, especially on the daily agenda. Note that this isn't a story update, but we'll discuss that a little more below.

Before proceeding, the image we're using as the DevLog's cover art is this fantastic piece of fan art by alpha0, which was kindly commissioned by RodrigoJacoboS. Thank you, and thank you to everyone who's been sending us their amazing fan art — you can look forward to the next fan art expo, that will be a good one.

Here's a look at the improvements made on the daily agenda (this is a screencap of a playthrough with the Math background, so it shows the exact number next to the progress bar). 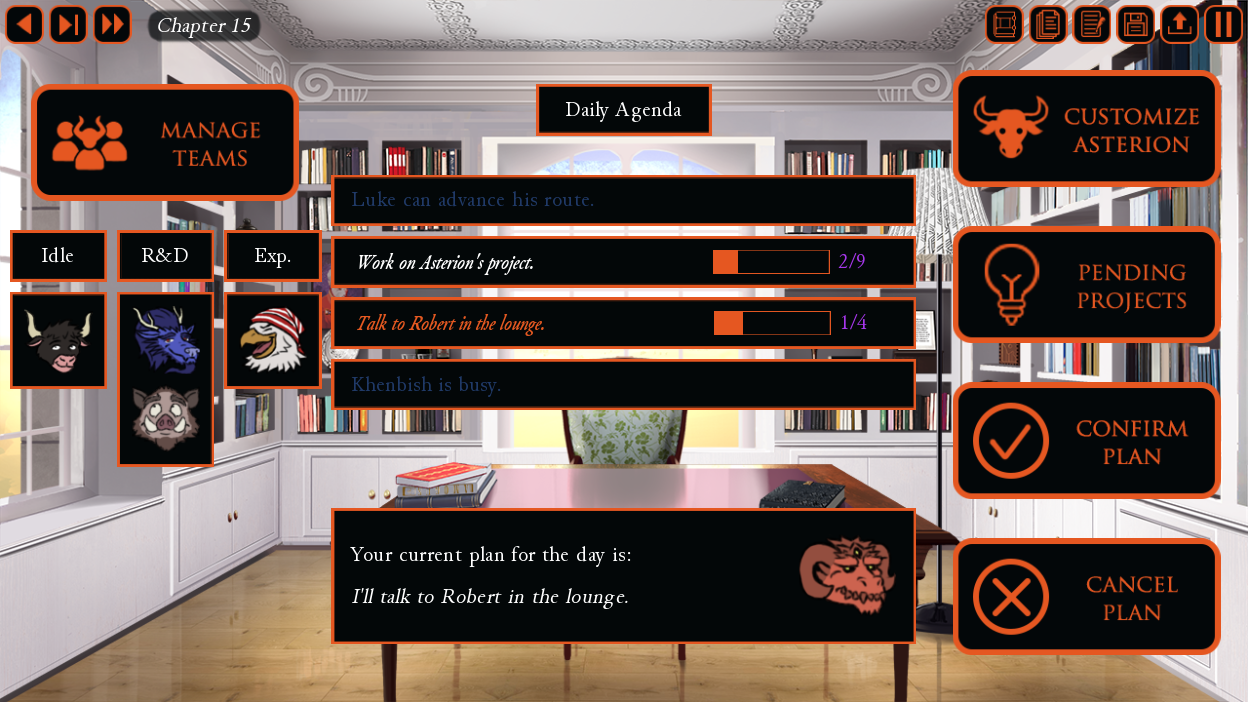 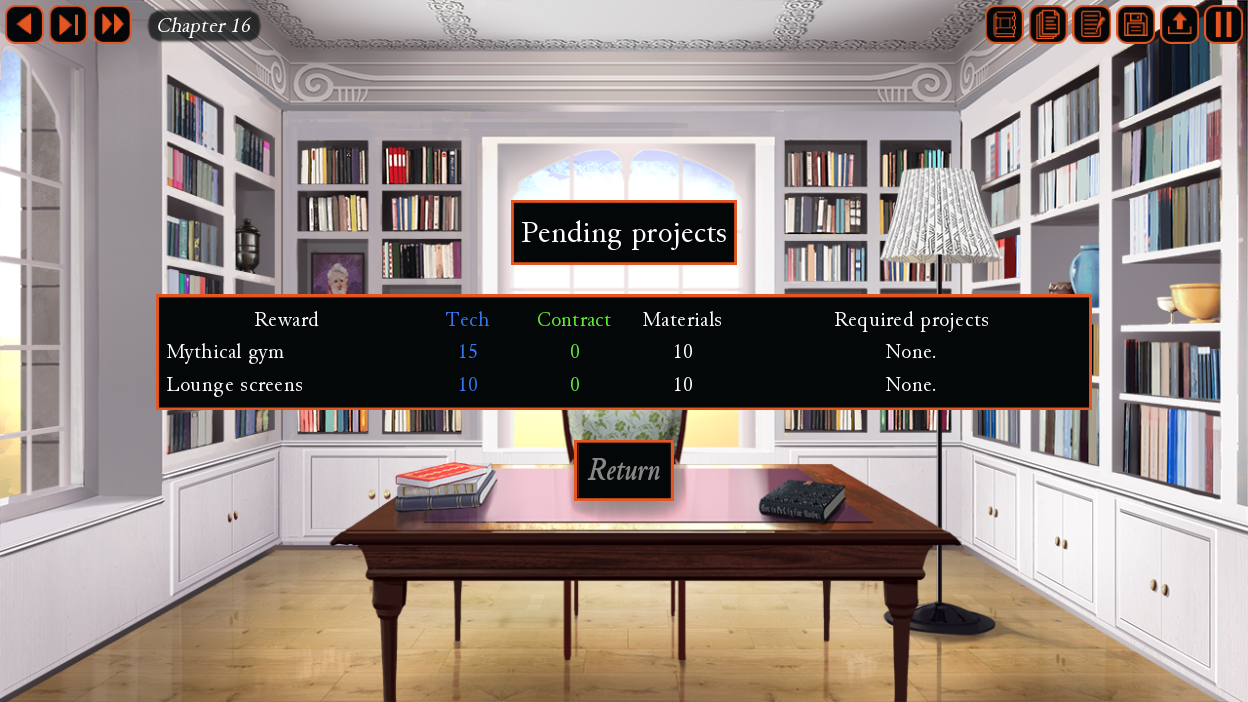 (Yeah, the projects screen is a little barebones as of now, since most of 0.5's new rewards are on Exploration, but we'll add more soon).

Most of these issues were brought up both in the form and in the forum, so please continue doing so! We couldn't address all of them on this update (some were difficult to implement, like queuing songs on the music menu, some required rewrites), but we'd like to get to it in the future.

As a general update on upcoming content... we're still on break. But, we have begun mapping out and planning the rest of the game and making a general "bare minimum plot beats and character moments we'll include" list for 0.6. We're doing our best to keep the next builds smaller, but still substantial, so we'll take a while before we get there.

However, we will most likely release an 0.5.2 update (maybe more?) before 0.6 comes out, which would expand on some hinterlands locations, add new R&D projects and exploration rewards, give some much needed rewrites to Luke's introductory scene, and redrawing some old sprites that enough people complained about. I'm looking at you, Greta.

And, of course, adding more optional scenes with the side characters. On the form, we asked you guys which character should get some route content first...

... so we will start with Kota, most likely.

Hi! Nanoff was so kind as to write the DevLog so far, but I (MinoAnon) will be taking over now to deliver a brief message.

It's been 15 days since we released Build 0.5, the product of almost a year's worth of work. The response to it can only be described as unprecedented compared to all other updates we released before it. The messages we received conveyed such a wealth of affection and enjoyment for the game, and the comments we've read show that many of you are engaging with the game in such a deep, thoughtful level. We're all incredibly humbled to have such a thoughtful audience that really dissects the themes, shares their theories, and brings up our flaws so we can learn from them.

Now that it's been two weeks since the game released we can speak more openly about the game's contents, as doing so before would have spoiled the surprises. Now, I hope, you can appreciate why Build 0.5 had to be so big and couldn't be split into smaller and frequent updates. We wanted the mystery, the build-up, the development, the gigantic pay-off to come all in one go so that players would experience the full roller coaster ride we envisioned.

We stuck to our creative vision and delivered it. Now I can't describe how glad and happy we are that you, our readers, enjoyed and engaged with the story.

Art is a way for people to connect with others, and I think we managed to connect through all of this. Hopefully we managed to bring a little bit of joy to you guys after this horrible year.

We look forward to bringing you more joy further down the road. Thank you for sticking with us, and check the Forum if you want to talk with others about the game. We have some ace detectives there trying to connect all the dots. 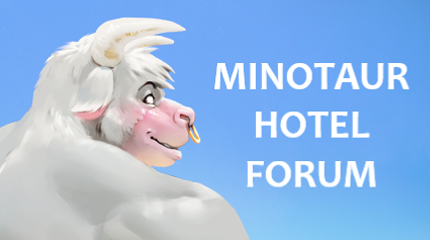 Is there a specialized thread for reporting typos and bugs? I believe I've found one at Kota's first visit to the hotel (Kota I):

"I myself am from the [Mediterrean], far away from here, so you can rest assured that all guests are welcome no matter where they come from."

Is there a pc-old version of this, too? I am worried the graphics will collapse again.

I don't know if anyone else has said this but out of all the furry vn's I've played (which is a lot) there's only been one other vn I've played that has had an animated scene and that's Sileo "https://xevvy.itch.io/sileo", but I still don't think any other furry vn has a up close and personal/ first person, kiss scene thing and I love!! both the Asterion brushing scene and the Asterion kiss scene/scenes.

i feel like some of the routes on the daily agenda are a bit too dragged out in # of days for the amount of content. like some of robert and lukes conversations could be 1 day instead of 2, same with a few of asterions project days. I know we'll get more days to complete more things and maybe you dont want the meatier daily agenda stuff to fall on longer days. but a few of the daily agenda things just feel like "why would we stop here weve barely done anything"

So I don't quite know, was 5.0 the end of the story? I do hope there's more in the far future (I thirst for dat Argos relationship) but I understand if a story needs to find a finish

Marvelous! Perfectly splendid! I wanted a development on our relationship with Little Star and I got it! Infinite thanks to you. This update (5.0 + 5.1) was beyond perfect! It left me very satisfied. I must ask though, is the soundtrack list complete? There's this one track I really liked. I don't know from which scene it is from, but I remember it had the "achievement sound" in it. I will try to find it and I will edit this comment once I do.

I just got around to finally finishing a playthrough of 0.5 about the same time you released 0.5.1. 😒

But I just want to let you guys know that I loved it, and I wanted to thank you guys for the wonderful experience! I don't think I've ever developed such an emotional attachment to the characters in a game before.

Would it be better if a new playthrough was started? Considering the bugfixes...

The bugfixes aren't that numerous, most of them were just getting rid of leftover QA stuff, a couple very small dialogue branches that used to not trigger, and typos. Nothing on a regular 0.5 save should have game breaking bugs *that would warrant starting a new playthrough from scratch.

Everything else is just taking community suggestions to improve the user experience.