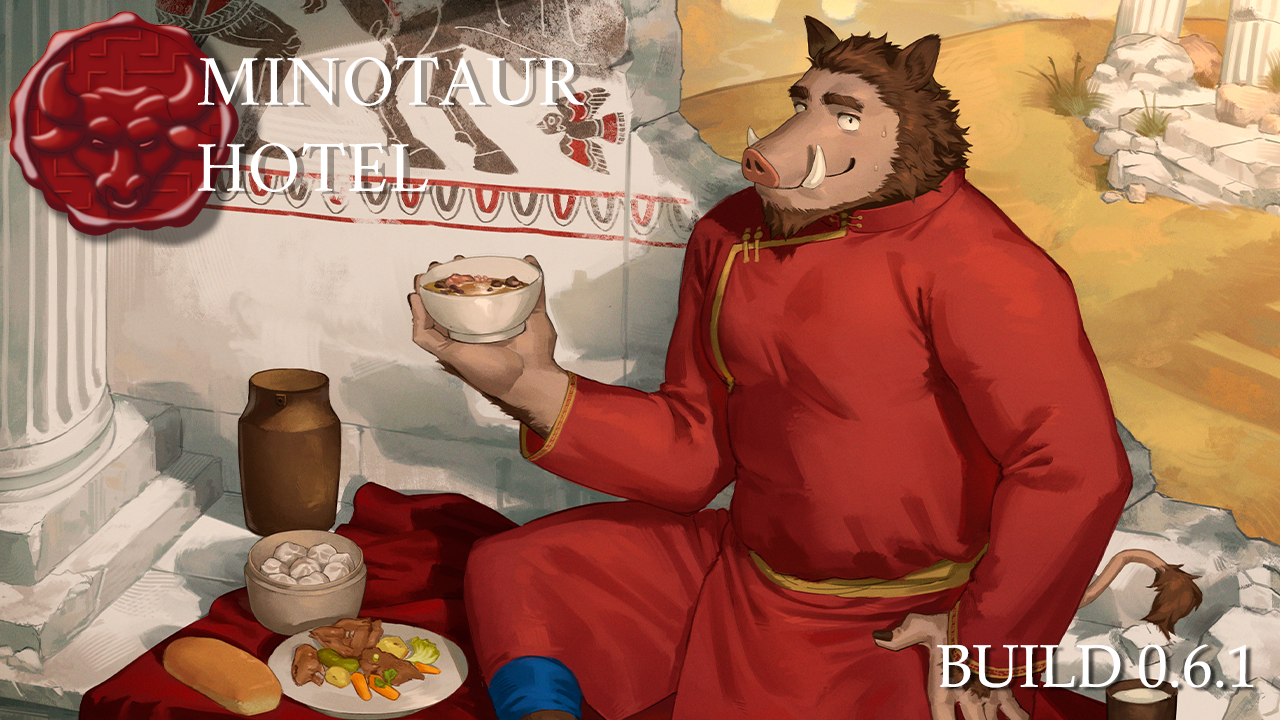 As previously stated, 0.6.x builds will focus on adding side content to Minotaur Hotel. We will add chapter 19 with the release of 0.7.

To play through Khenbish's route, you need to unlock him as a staff member first. To do so, tell Jean you want a cook on Chapter 15. You can also get Khenbish if you have the Arts background and pick the rug in chapter 16, but you won't have enough time to see all of his route by doing this.

Once you have Khenbish, select the option to hang out with him in the daily agenda menu. You'll have to do this six times to see all his content.

To watch the pool and bar scenes you simply have to complete the corresponding R&D project. Note that the Bar project is only unlocked after the pool is completed, as the bar is an addition to it.

We recommend completing the projects when you have more staff members unlocked, since the scenes change according to which characters you have unlocked.

After you play the new content, please go to our forum and tell us your thoughts!

Now, what about the next update? Well, here's the plan:

Build 0.6.2 is scheduled to come around July and will deliver the Hinterlands Expansion.

As we discussed in the Hinterlands Postmortem, we had a handful more ideas for events in the Hinterlands which had to be cut for the sake of getting the game out on time. These were some of our juicier ideas, in the sense that they add a lot to the story of the Hinterlands and its characters, but they were also some of the most literary.

Seeing the extremely positive reaction to the Hinterlands, however, convinced us to go back and add these pieces of cut content. Five events will be added with the expansion:

We are still figuring out the details, but most likely some of these locations will be reserved for a second playthrough only. More specifically, you'll need to finish the Hinterlands at least once and fulfill another condition. Only then, on your next playthrough, will some of those events become available. This is because they were designed as a literary equivalent of a "harder, bonus level" for those who were really into the Hinterlands. They assume the player has experienced the most "advanced" pieces of content the Hinterlands has to offer.

That is to say, if you like the "Base Hinterlands" and want to dive deeper into its mystery, you'll most likely love this "Hinterlands+". But if you didn't care much for it, it won't really affect things for you. Neither will this affect anyone's first playthrough.

The exception is the September 7th Parade event, which will be added to Base Hinterlands because it serves as an emotional capstone to Oscar and Pedro's relation. This is something that anyone who likes Oscar should be into.

This is it for now! I hope you enjoy the new content!

EDIT: We released a 0.6.1.1 hotfix addressing a small bug found by M3tav0X in the forum, another found by Orphy3005 (thank you both), and adding the full Epinikion at the end of Khenbish's route.

EDIT 2: Ok so 0.6.1.1 caused a pretty big bug when saving the game between picking your background and entering the VIP room or starting chapter 1 proper, I rolled out a 0.6.1.2 that fixes it, but unless you plan on saving right there it's not necessary. If you encountered the error downloading this version will fix it. Sorry for the inconvenience.

Okay, guys. I already praised Minotaur Hotel about a year ago. But I took liberty to play it again to see the new content. And I'm hooked on it again. I spare you repetition of my previous praises to you, but I just want you to know, that I'd left everything and everyone in my life for a chance to be in this hotel. You know, the furry visual novels keeps me going in my life for a couple of years now. "I want to be like him, I want to do this, I want to feel that, I want to see this, I want to be there", all that stuff... Sometimes it works out, sometimes it doesn't. But Minotaur Hotel is something else. The first VN I want to experience IRL in its fullest. Though I understand that this is a fantasy, but the man can dream, right? At least, it revives my long lost dream to open a small hotel of my own. :)

But I, just by chance (I don't understand how the R&D in the game work), invented the infinity pool... and stumbled across the most beautiful scene of the game, I think. Refreshing and light-hearted. This makes me longing for something similar in my life.

Anyway, I want to thank the Minoh team for their selfless work. And waiting for the new update. ;)

p.s. Just in case, sorry for my English, not my native language. :)

It's my first time playing but I understand the feeling, I would also like to live in this world, at least a little, to learn about the existence of Mystic Furryes, Magic, Gods, Vacation in a Magical Hotel, interact with everyone, it seems so amazing...

Saying in a very crazy way, if I became, somehow, master of this kingdom, I think I would live happily in this world, exactly the way I experienced and played in the game, Asterion moved me, man.

Sorry for my English too, my native language is Portuguese, I'm using google translator, I can read and listen in English very well, but writing and speaking i still lack

We are working on it. The last third of the story (Chapter 19 and onwards) is still in development.

So I have a question : Is chapter 18 the end of the game or we still have many chapters to come ?

We have more to come! Everything up to Chapter 18 makes up about two thirds of the story, so there's more to go through. For now we are focusing on the side content, however.

So around 9 more? Is it possible to get an exact number?

Thank you so much for new public update I love it great work looking forward to the new version Build 0.6.2

damn, way to spoil hinterlands in the last two sentences

What is it you consider spoiler-ish, specifically?

Oh well. I assume that people reading the devlog already played the game at least once. A fresh player usually just jumps right in.

eh, they are just name drops. chances are you'd just be confused about who they are. these are the kind of spoilers you might only spot if you already know. besides, they could be julian and carlos or any other names and it wouldn't make a difference. because there isn't a specific meaning to their names, like it is for another character.

fair? i guess you could pick up on that with context from the rest of the post, but i think it's just me knowing the story

i think me bringing it up makes it more of a spoiler, so i'll delete the initial comment :>