Build 0.1: Where we came from and where we are going. 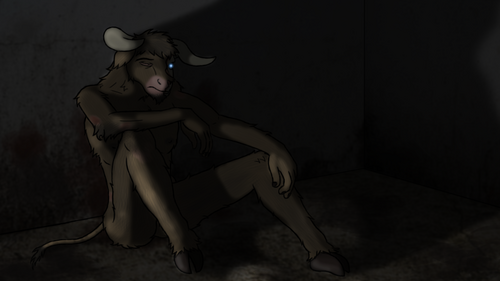 Hello everyone. I'm MinoAnon, the main writer for this project. Over this week we released the first build for our visual novel, which has been warmly received. Today I'd like to talk a bit about how it came to be and where it's going so you are all up to speed.

For a while now I have been writing a quest -- an interactive story where readers give their input on what should happen next. The audience chose the main character's decisions and gave input on what the hotel's guests should be. From this input I did my best to craft a compelling and original work with captivating characters. All of this under a Creative Commons License, so others could write their own derivative content if they so wished.

That is how the earliest version of Minotaur Hotel came to be. As it went on I got together with our artist and programmer, nanoff, and fellow writers who wanted to contribute. We started working on this visual novel that would translate the original Minotaur Hotel experience into a longer-lasting and more accessible format.

That is the history behind the project -- but what is the game's plot, after all? Well, following the inspiration from better novels such as Autobiography of Red and The Minotaur Takes a Cigarette Break we tell the story of a mythological figure in current times. You'll meet Asterion, the minotaur from Crete, who as it turns out was sentenced to eternal damnation after his defeat at the hands of the hero Theseus.

A lot of stuff happened over those thousands of years. He was locked away in a labyrinth realm meant to torture him -- which was repurposed into a hotel thanks to human ingenuity. Now you are this place's most recent master and you can make of it what you will. You can either have mercy and treat the minotaur well or you can stick to the gods-given duty of making his existence into hell.

As the master of the "Minotaur Hotel" you will also take care of its installations. Eventually guests will arrive, each one with their own stories and content. You can manage them -- send them out to explore the valley where you may find valuable loot or assign them to research this magical realm's mysteries. There's a lot to learn about how it works -- and how it can be further used.

The response so far has been warm and kind. We are all very happy with all the feedback we received -- it has been both motivating and thoroughly constructive. We hope you stick with us in this fun, exciting project. Now here are a few questions you might be asking yourself:

What to expect from the next build?
Our plan is having at least two guests implemented in the next build -- Kota the dragon and Luke the griffin, as shown in the current 0.1 build. We'll also have a few more chapters advancing Asterion's and the player's main plot. Most of the coding is implemented so it really is a matter of writing the content.

When can we expect the next build?
Hard to say right now. No promises on any specific date. We aren't working under a monthly Patreon-style format -- we will take the time we need to craft a satisfying content update.

Will it be free?
Yes! We want Minotaur Hotel (or Minoh for short) to remain free for everyone.

Will the main character date the guests?
No. We decided to go with what some could consider a peculiar structure for such a visual novel. There is only one dateable character -- Asterion -- but the guests offer their own stories. Each one will have their chapters and they can end up dating each other.

I want to donate money to the project, how can I do so?
That is very kind of you, we take it as a compliment. But Minotaur Hotel is a non-commercial project. We won't be taking donations unless it's to cover for project expenses like paying for licenses -- even then we'll still be wary about it.

I am a streamer/Let's Player, can I record my playthrough of the game and monetize it?
Yes. Minotaur Hotel is under a Creative Commons Attribution 4.0 International License which means you are free to share and remix it as long as attribution is given, under the terms of the license. You don't even have to ask for permission. We'd still welcome it if you gave us a heads up so we can share it on our social media.
Some CC Licenses prohibit remixing with commercial purposes. That's not our case.

I want to draw fanart/produce a derivative work and make it available on my Patreon. Is that ok?
Yes. The same argument from the previous point applies. We would also welcome it if you informed us -- because we'd enjoy seeing it. But it is not required and you don't need to ask our permission.

Asterion is adorable, will we be able to hug him in the next build?
Absolutely.

That's it for tonight. Again I hope you guys stick with us in this journey!