Hello everyone! I hope you are all doing well today. We are so close to releasing Build 0.2, less than 48 hours remaining!

This DevLog was written a few weeks ago, about 14 days after we posted a very extensive DevLog about Itch's tagging system and how to use it if you are making a gay visual novel. We intended on publishing it back then but chose instead to leave it for when we were closer to Build 0.2. We think it's an important topic and figured keeping it for the right moment would be smart. So keep that mind -- the data we are showing here came from a few weeks ago unless otherwise stated.

Before we start I must make a shout out to all the people involved with BaraJam 2019 and BaraJam 2018. Without their support (and delicious data) those findings wouldn't have been possible. Remember this name, it will be important in one of the points down the line. Now, let's get started.

How are the Bara and Furry Tags Doing so Far?

Before we start there is something which must be made clear about how Itch tracks where clicks come from: it only shows the top 20 referrers. This means that after a while, when big referrers have piled up, it becomes impossible to track down the smaller ones. So, in a sense, a new game's launch gives us a very unique opportunity to verify how more discreet tags are doing.

The image below is a courtesy of Stormsinger Studios, who let us see the data for their newly-released game Santa Lucia. It shows us some insights we had already glimpsed in the previous DevLog: Gay is the main bread winner and having an Android version brings a lot of traffic. But, most crucially, it gives us insight on how the Furry and Bara tags are performing.

Furry brought 286 visits in total, from two origins, and Bara got them 57. As we can see Furry is doing well enough, while Bara is lagging behind. One could be inclined to discard it, then, but Bara brings a very important benefit: it groups together games which definitely share the same niche audience.

Another important information about Santa Lucia: it makes good use of its tags (adult, Bara, Dating Sim, Furry, Gay, LGBT, Mystery, nsfw, Romance, Synthwave). It is no surprise, then, that after only one week it is already showing up in other games' Related Games page -- at least it's showing up in ours. 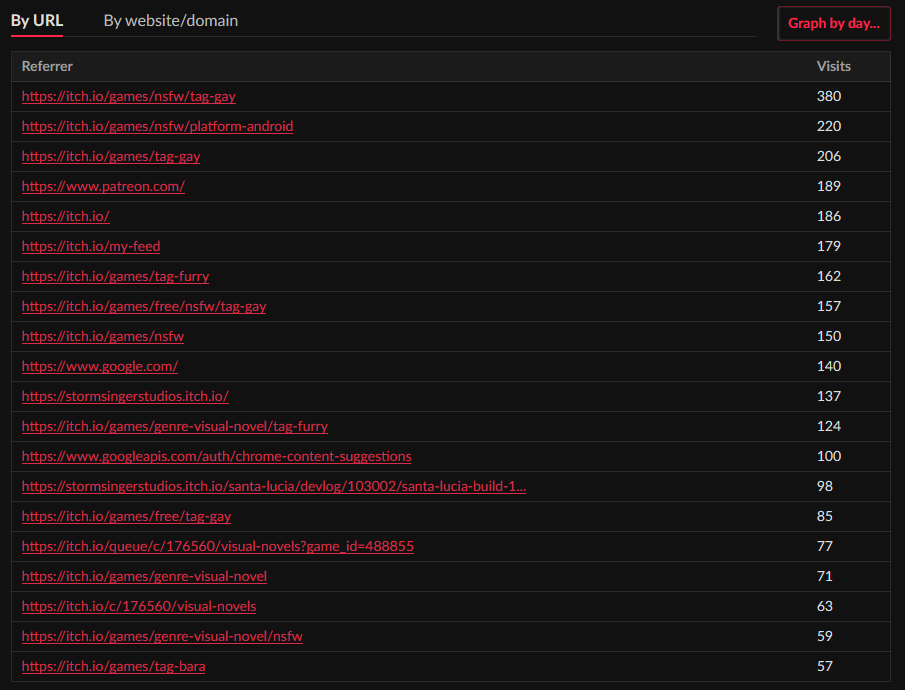 It's important to note this confirms what Nekojishi's data indicated, that Furry and, to a lesser extent, Bara, do bring in page views.

So, is the Yaoi Tag Any Good?

If you check the previous DevLog about tagging you'll find that I wanted to test how much traffic the Yaoi tag brings. Well, thanks to the data provided by bobcgames about Yearning: A Gay Story (first picture) and Wolfscade about Charles 2.0 (second picture) we have the answers! 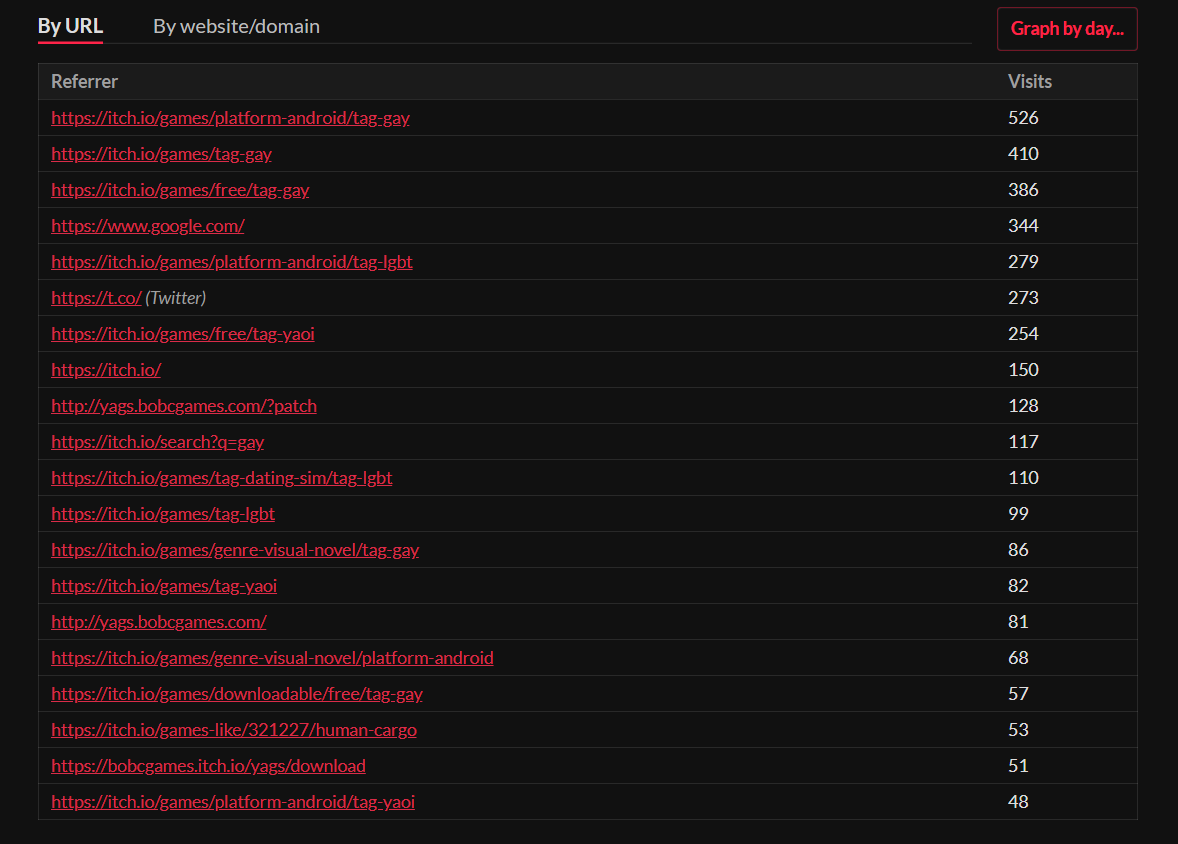 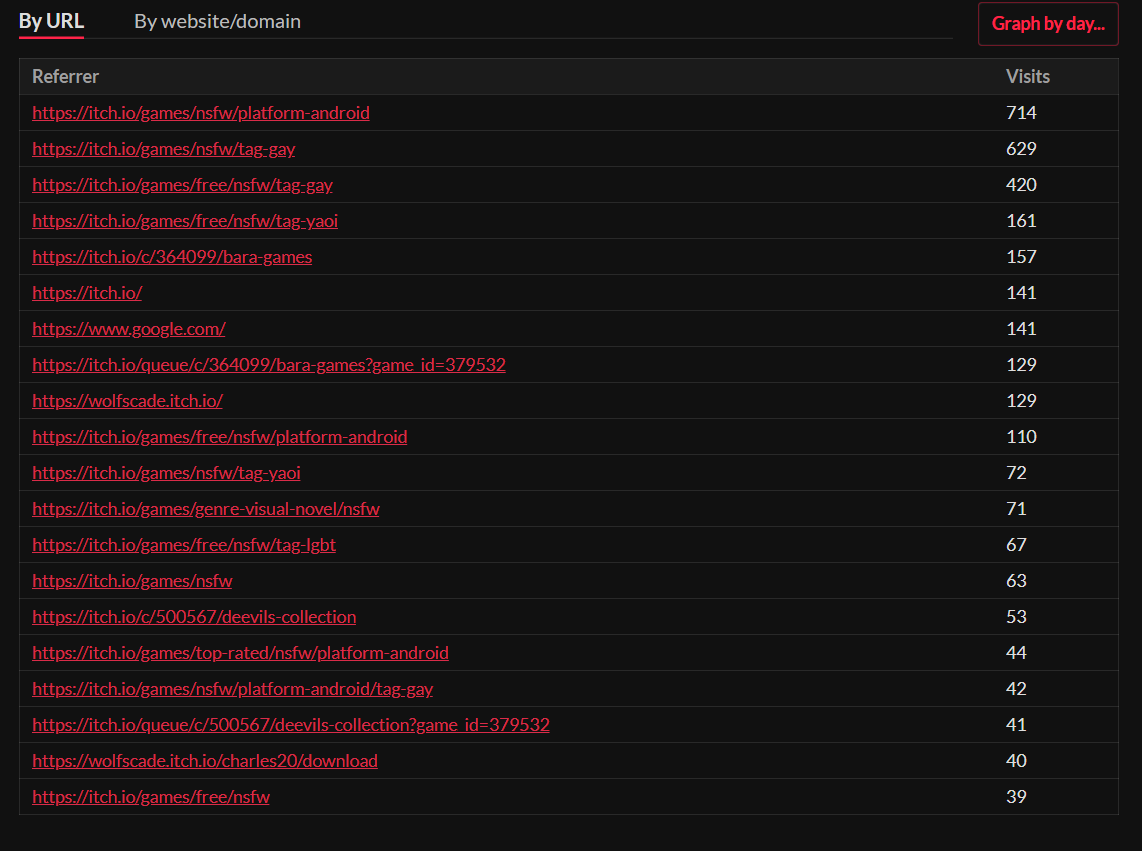 As you can see, Yaoi brought about 400 views to Yearning and and about 230 to Charles 2.0. Those numbers don't really compare to the juggernaut that is the Gay tag but, hey, they are pretty good!

Does this mean your gay game needs the Yaoi tag?... Well, not necessarily. As some of you may know, Yaoi has very specific connotations as a genre. Its description in Itch is as follows:

Yaoi, also known as boys' love, is a genre of work involving romance between men. The word originates in Japan and is typically seen alongside an anime style.

This contrasts with Bara:

Bara is a genre of gay art emphasizing masculinity as a core component, typically featuring characters with varying degrees of muscle, body fat, and body hair.

While Yaoi is a good tag (arguably better than Bara when it comes to bringing in traffic), it's important to keep in mind that it may lead Itch to grouping your game together with other games in the recommendations. Take a look at the games with Bara, Furry, Gay and Yaoi tags and think for yourself if you'd like your game to be associated with each of those tags. Do they have the same audience as your game? I know for a fact that Minotaur Hotel won't follow the Yaoi style so I'm making a choice not to use that tag.

What's That About a "BaraJam"?

Jams are usually events where participants make a game under a time limit. There was a BaraJam in 2018 -- an event about making games with Bara content -- and there is one happening until until December 1st. It's a great idea and I highly recommend you check the games that were submitted.

With that said, some participants from BaraJam were kind enough to show me their referral data. We'll go one by one.

Human Cargo, by Rob Colton shows us what it looks like when your game is well integrated and getting referrals from other similar games. Do note that BaraJam 2018 is still giving him page views (168 in the last 30 days) even an entire year after it ended. 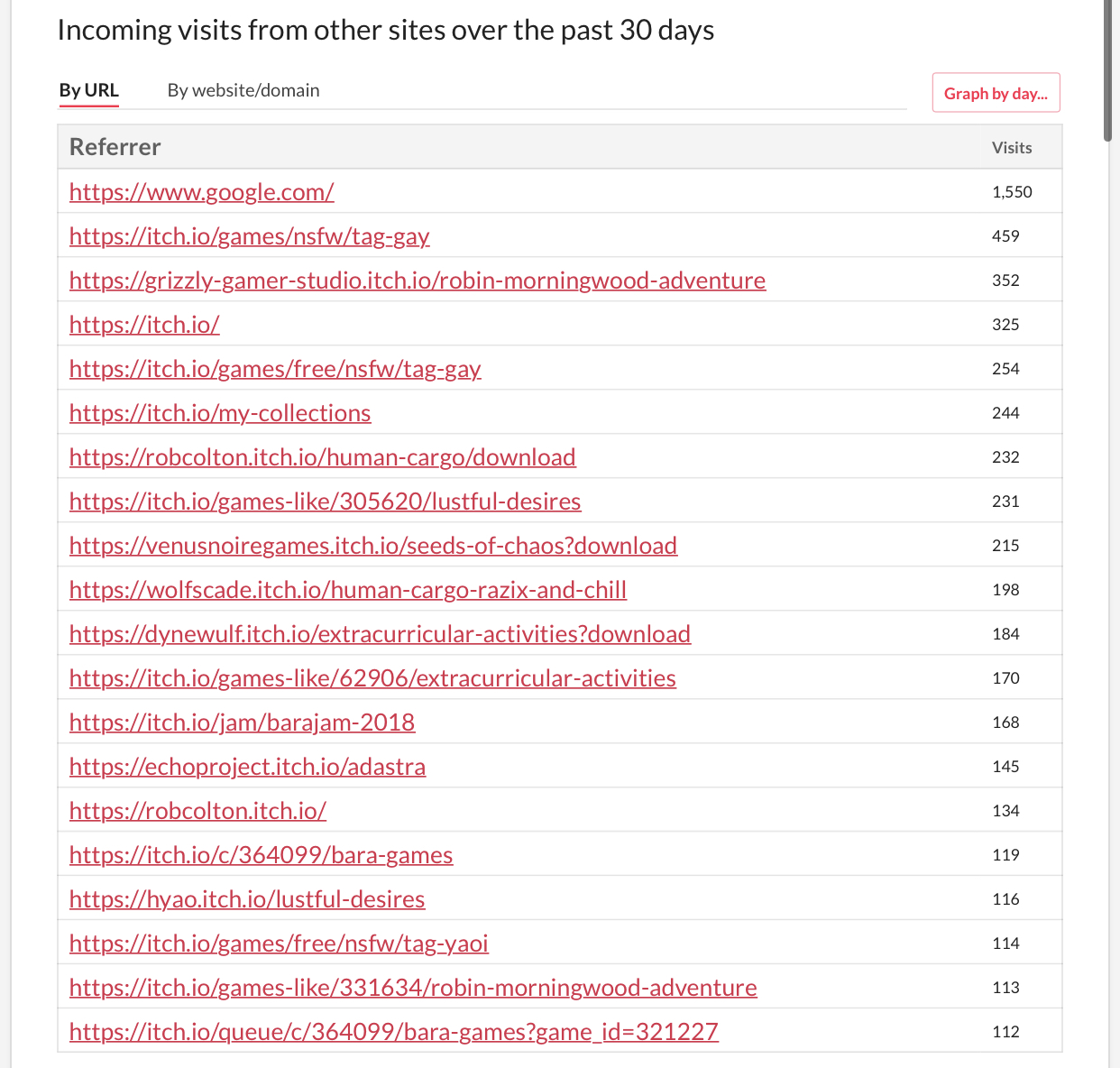 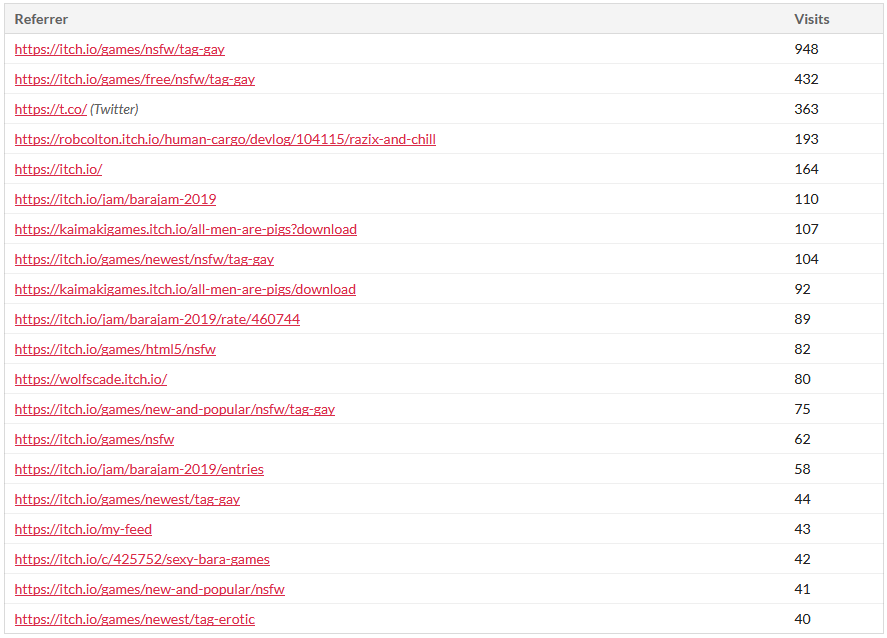 The one below is Hijiri's Where the White Doves Rest: Tsumihanseishi. This one also has BaraJam 2018 as a very relevant source of traffic but it also shows quite clearly how the participant games seem to stick closely together in the recommendation algorithm. This kinda makes me think that making a Jam might be the most straightforward way to integrate your game with similar projects. 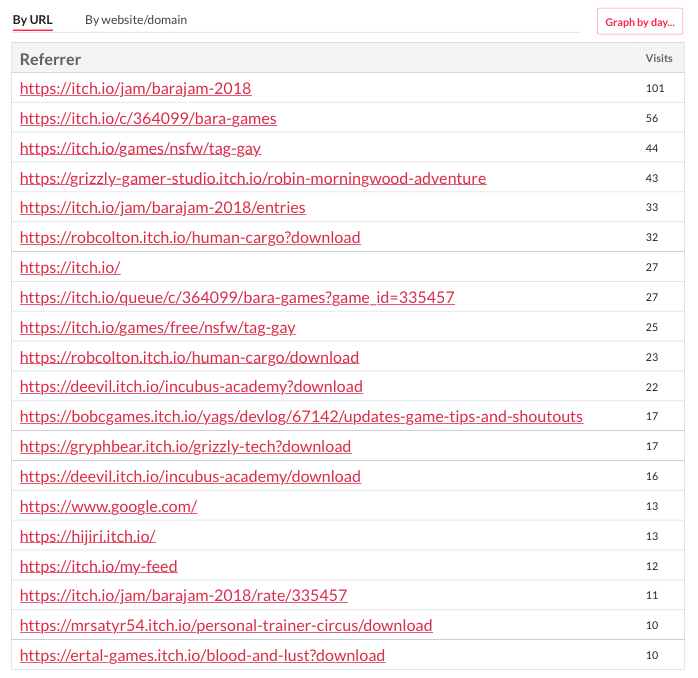 Here's our last one: Deevil's Incubus Academy. I'm posting this one for completeness' sake, it only reinforces the points I already outlined. 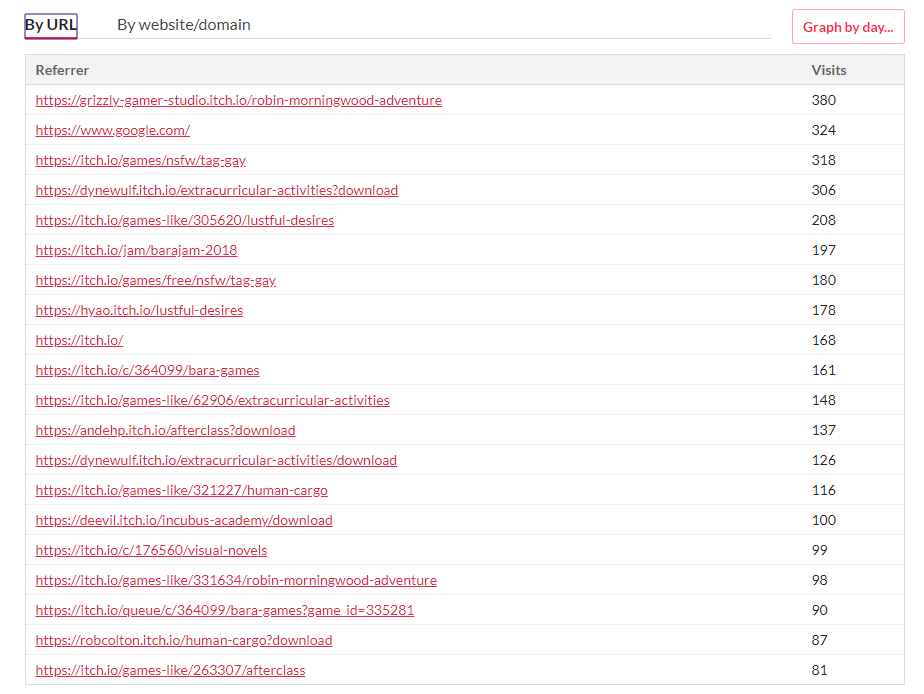 So, we have three main conclusions from seeing the data about BaraJam

We can summarize this into a single point: Assuming (1) the Jam you're submitting to can bring together users to download the games and (2) your game fits it, there doesn't seem to be any downside to submitting it to said jam. This seems simple enough but the implications are quite extensive, more so when we add one final piece of information to this equation.

Usually you are expected to make your game during the jam's timeframe, but Itch allows you to submit previously-existing projects. It would be up to the jam's admins to reject said game, assuming it is against the jam's rules. What this means is that it is possible that a jam can be used to kickstart Itch's recommendation algorithm in the right direction. It can even be used to group together games that have been out for quite a while.

So, this entire thing gives me an idea: Itch's Jam function could be used to create something like film festivals. Perhaps it could be an yearly event -- a Bara Fur Fest where games are invited to join so their communities mingle together. It could be made to have something to engage the audience. My first thought was a competition for best game, but that could create undesirable tensions between developers. So instead there could be a playful competition -- maybe a GAYEST GAME prize to be determined by audience vote. A friend, Badger, sent some very interesting ideas too: Troperiffic (best use of otherwise typical tropes), Hunk Overload (who has the beefiest baras), and Feels are Realz (which game is the most emotionally heart wrenching). Those are just some initial ideas. There's a lot we can do while keeping it light-hearted, suffice it to say.

I used Bara plus Furry as an example because it's a niche enough proposal. A Furry Festival, on the other hand, would most likely be flooded by an excessive number of submissions. It might be for the best to make niche-oriented Festival-Jams, so only actually similar games are grouped together. So, instead of a broad Furry Festival it would be best to add qualifiers -- like "Gay" or "Adult", or by genre like "Visual Novel" or "RPG".

Another relevant point in this whole affair is that, in the end, all participating developers stand to gain. It's good to keep in mind that we all share a similar-ish target audience, and connecting projects via the recommendation algorithm can reduce audience loss across the community.

This is a very important finding, and I urge all developers making visual novels to listen to this. When you are uploading your project to Itch you are given the following dropdown menu. 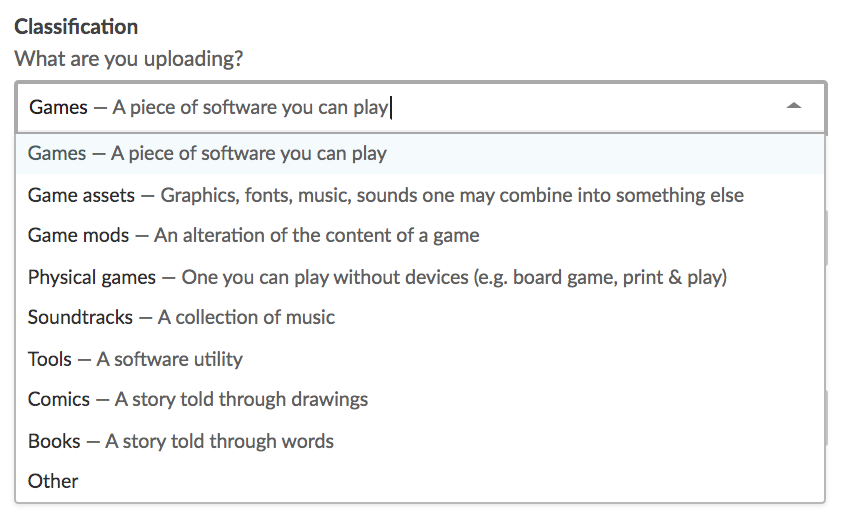 Now, there is an on-going debate about whether or not Visual Novels count as games. No matter your intellectual inclination in this matter, you should pick "Games" as your project's classification. If you don't then you will lose thousands of page views, because when people search for the tags you use they will only see Games that have them. If you pick "Other," in contrast your project will only be found if people specifically search in the "Other" tab.

Didn't You Mention Something About a "Kemono" Tag?

That's right, I did! I was trying to figure out if it was any good and... The results so far are inconclusive. Hard to say anything for sure but I don't think it's an expressive tag, although there's a small chance I might be wrong. This is a topic I may bring up again in the future.

I still have a few suspicions about specific tags. Recently I discovered there's a Monsters tag with over a thousand games, 40 of which are NSFW. The unofficial "werewolf" tag has 44 games, one of them is NSFW. There's also an unofficial "minotaur" tag with 13 games, none of them are NSFW.

There may be some potential for optimization by discovering tags which attract users, but that's not something we can collect data for in the foreseeable future. I'll keep my eyes open.

To close up, since so many devs were kind enough to show their referral data I think it's only fair we do the same. This one dates from mid October... 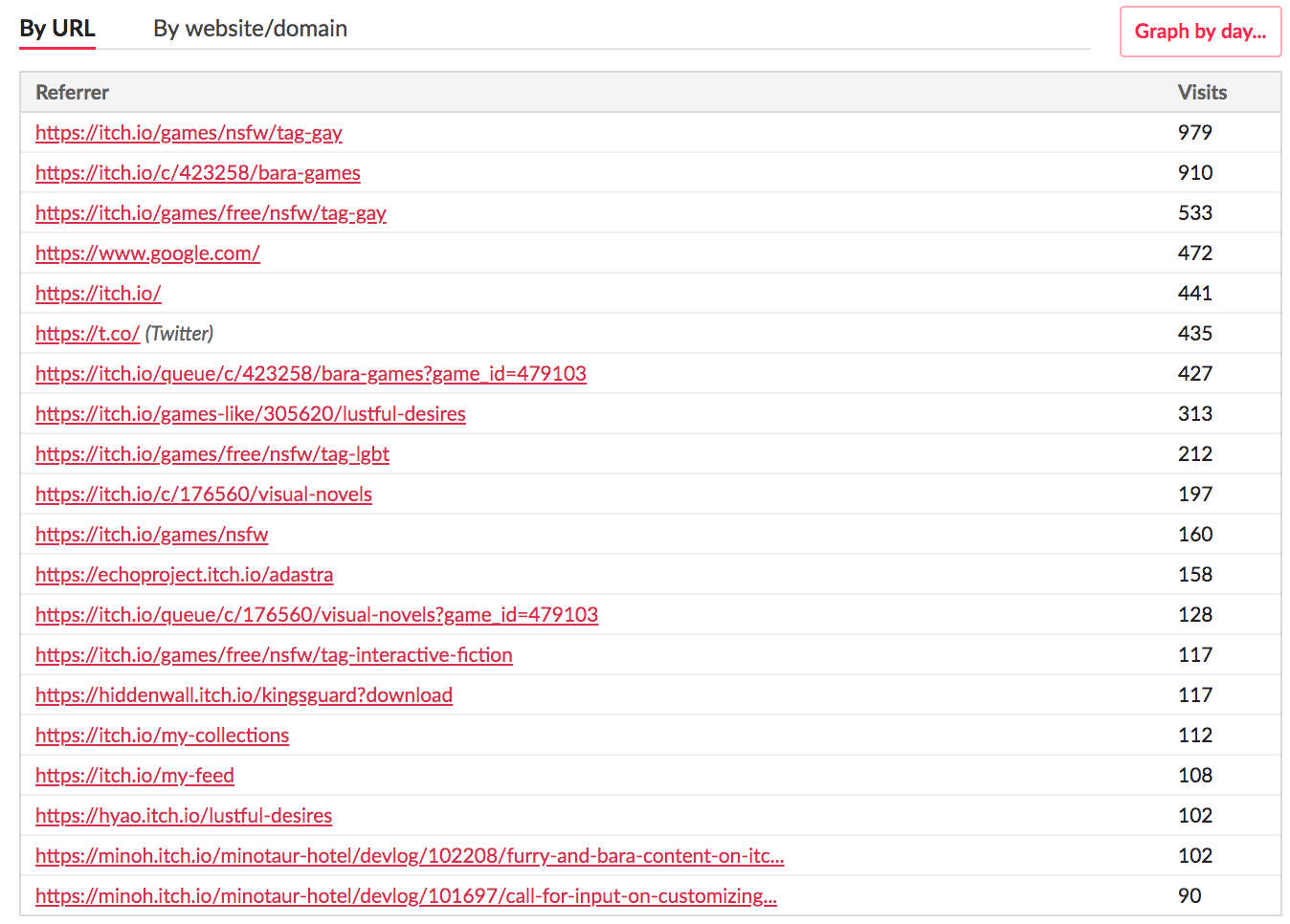 The next one is recent, from November 12th... 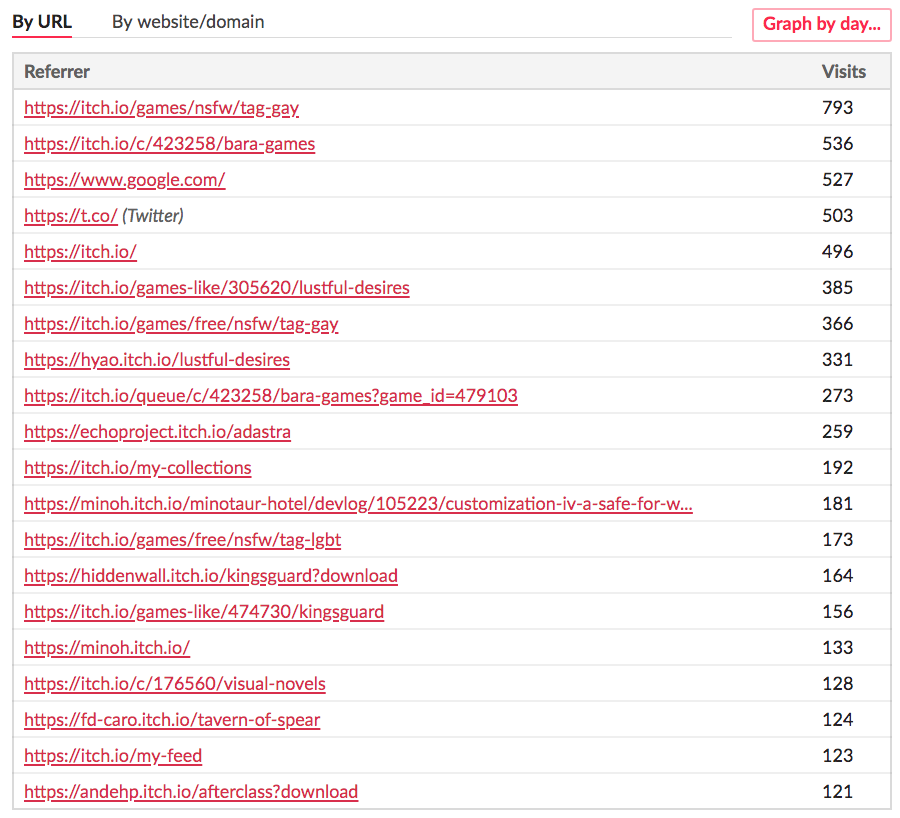 Do note that this table only contains the page views from the last 30 days. As it's been a while since we released the game it's gone down a few blocks in the tagging system so we don't get as many clicks as before.

And the next image is our graph of page views and downloads ever since we released the game.

We are doing pretty well! It's not often you see a game retain engagement like that over two months! And we owe it all to you!

As a final point I find it very interesting how this bara games collection became such a big source of clicks... Try looking back to the data we showed today, you'll find ours isn't the only game benefitting from it. Many thanks to hyou vizer for making it in the first place.

That wraps it up for today! Tune back in about 48 hours when we release build 0.2!

Great statistical and internet algorithm analysis. Do you right thesis papers for a living :D

I wonder if it would be better to use the tag 'muscle' as well 'bara' if you considering the fact that ithcio is primarily an English website.

That is a very interesting option. Yes, it's possible muscle might be a worthwhile tag! But we are stumbling on an issue lately which is... We only get the referral data for our top 20 referrers and they are so far ahead that any new tags we try remain with their performance hidden. We might test that out with the help of other VN makers though, who knows? Thank you for the suggestion!