Send us questions! We are having a Q&A Session!

Hello, everyone! In preparation for Build 0.4's release next week we decided to do something fun — much like we did last time we are having a Questions & Answers session. This means you can send us your questions, we will answer them and post everything this weekend.

For this Q&A we will be taking pretty much every kind of question — the creative process, behind the scenes, characters and plot, lore, shitposts, etc. Do keep in mind, however, that we want to make the answers 100% spoiler-free so we might not answer everything. And to make things more interesting we will also take questions about our other projects — Boomer's Big Date and Orc Breeding.

Post your questions on the comments below, please, and see you this weekend!

A little bit late, but this question won't leave my mind: Will it be possible for a player to build a romantic relationship with Asterion in future build?

Ah, what a pleasant news to hear. And since you replied, I want to thank everyone behind this wonderful game! Can't wait for new updates! Also, do you guys have a patreon or something where we can donate?

Minotaur Hotel doesn't have a Patreon, but nanoff (our artist and programmer) does have one for his own project, Boomer's Big Date. Nemo, one of our writers, takes commissions.

Although completely unrelated to us, Minotaur Hotel uses a song recorded with a replica of the Greek ancient lyre so we a lot of gratitude to the people behind that project — if people were to support them it would make the day for us.

when will we have the next clothes, accessories, and tattoos for asterion and will there be any other than to show up so far.

your game is awesome asterion is just adorable the story is super interesting and really promises a lot you do a great job and continue on your spear.

sorry if it's poorly worded but i'm french.😅

Will we see any of the gods in modern form? Or possibly at all?

Does Luke find the "one"

Will we get to work out with Asterion eventually? 😤

What sparked your love for Greek mythology?

Why is MinoH (currently) vanilla compared to Orc Breeding? Vanilla in terms of the content presented I mean.

I was drinking something dammit 😂

1. When you write the story, do you imagine yourself as an observer or a creator? As in, do you just observe how the story progress or you decide what will happen? 2. If we have romance scene in the future, when you read what you write, do you think of yourself as the MC or Asterion or just an obserever?

3. Are you worried that by introducing so many characters, you won't have enough plot for them and people will not be able to focus on all of them? Or if some will become irrelavent?

4. Do you plan to add interactive CGs in the future for romance scenes?

While the hotel is a place, it also seems to be a character as well.  Will we get to  see more of the Hotel's personality?  Does it even have it's own, or is it merely a reflection of the MC or the gods?  I too am very excited for the revelations of the new build!

Are you folks doing alright? with everything going on in the world just want to be sure you looking after yourself's  and not stressing to much about the game which is BRILLIANT and i love my boys, just want to cuddle Asterion  all day and tell him no one can ever hurt him ever again.

Thank you for asking. We are doing well! This release isn't nearly as intensive as 0.3 was, thanks to it being smaller and less complex. As with everyone else this horrible year wasn't too kind on us but we are all healthy and doing ok. Again, thank you for asking.

First of all, i love the game! You maighy have not seen my feedback that was a book long, but i got to a point where i eas addicted the this game, especially the minotaur. I think it's a psychological thing and i am still trying to process everything that happened two month ago.

All right. So, i would like to know whether or not there is a new interaction system or an at least an inprovement to the current one. Also, i've seen some R&D uncertainties. In addition, i heard that the update is going to be a major one. This is something that everyone hopes is true. Thst would be it for now. If i have any more questions i'll edit this comment. Thank you very much for making this game. It helped me become a better person and what's more it made me be more conscious of the decisions that i make and the situations that i end up in. Thank you again. Looking forward to the 0.4 build release.

Any plans to add new clothes and stuff like tattoos and piercings lol since I played the good and cruel master routes I wonder if the cruel master thing can have other development like making an alliance with the snake ? And is there gonna be more flash back on Asterion past with other masters ?

Any chance we can get a little merry band together with the guests? Asterion has his lyre, and Argos his flute.
While i wholly understand if there is no reconciliation between the two, admittedly it would be fun to see some changes for the better. Either way, keep up the excellent work mino team!

2. Will there be any Mexican characters later on in the VN? As part Mexican myself I would like for the VN to somewhat explore the culture a bit, especially about Día De Los Muertos (Day of the Dead).

3.  What inspired you to create such a fantastic and basically best VN I have ever played?

4. Will there be any disabled characters later on in the VN? As part of the Autism Spectrum I am interested to see how you would go on into doing that (If you do it, its ok if you don't).

Also, apologies if I typed something weird, my English is not the best.

Any chance we can romance the sneaky snake? I tricked him and earned his delight with me. I very much liked that whole interaction with him. I now want to see him romancable if just because he IS so tricky and yet can enjoy being outwitted.

Also may I just add that Orc Breeding was incredibly hot... is there any chance we could have an easteregg of male pregnancy in the game? More little white bulls, anyone?

Will Asterion get to experience playing video games like Hades?  I'm always interested in seeing how an old man like Asterion reacts to the world that evolved without him

Is the cruel master route even really a choice? How could anyone treat our bull so poorly?

I wish to know the same thing. If the cruel master route updates, i won't even think about opting for it.

By the way could you post the picture of the thumbnail?, The one of Asterion in glasses reading a paper? Please? 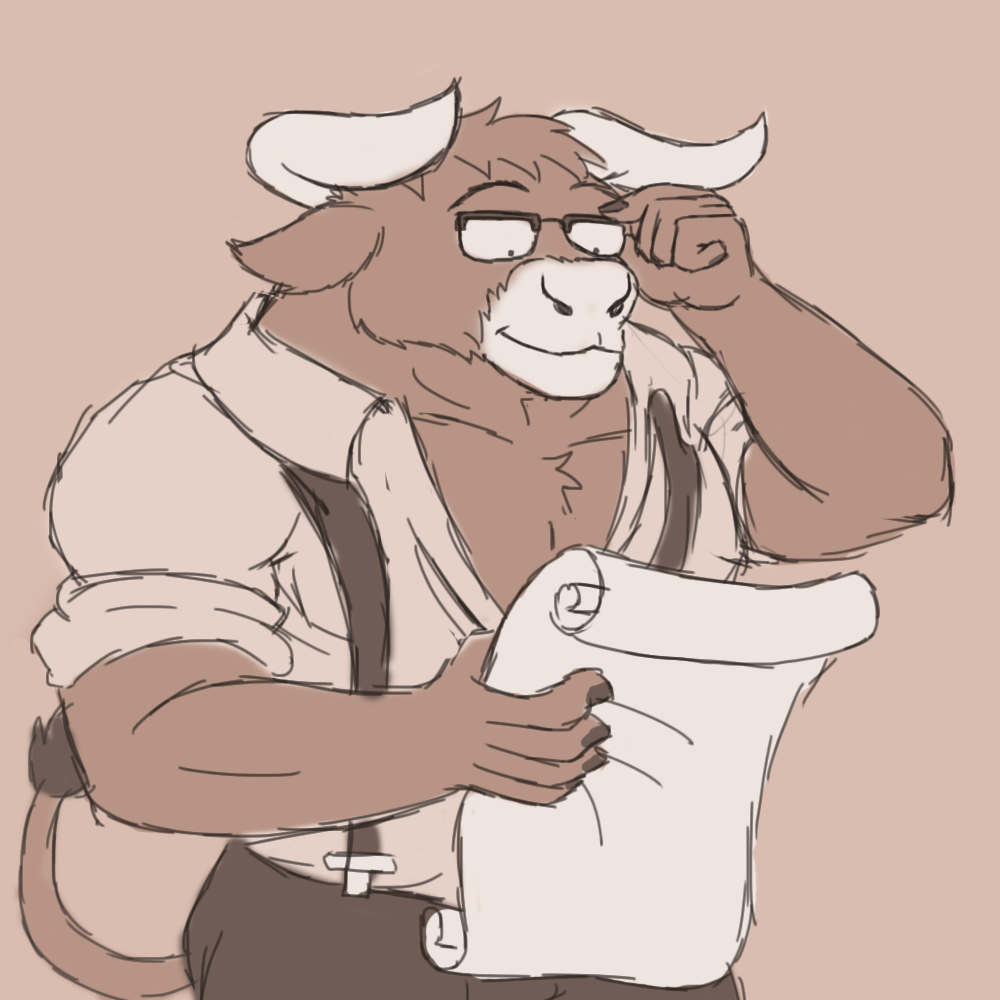 1. It was mentioned that Argos has taken different forms over the years, is that going to be explored in this story? I'm curious if he's a full shapeshifter, or there's a ritual to transform that takes a while. 1a. Related, is he really even his own person? Like, Asterion says something like he's the manifestation of the land and rules designed to torture him, will we get to know if that is actually the case? It's hard to tell if Argos was a being tasked with showing his devotion this way, if he was literally created to torture Asterion, or if he really is "torture personified (fursonified)" and doesn't exist beyond those rules.

I ask not because I have any interest dating him or redeeming him (he can be as buddy buddy as he wants after being happy we outsmarted him, I'm not gonna trust him), but he's a fascinating villain whose story could be tightly wound with Asterion's, if it's being told.

2. Do you have a pace in mind for giving out the Build a Moo clothes? Obviously there are/will be special things we give him to wear (like the bracelet/neckerchief/medallion) but some of the basic things like gym clothes or a toga could come any time now that he's back to "full size".

3. How much sci fi were you planning to bring over, compared to the Quest thread that started this all? With the way doing R&D can get a focus on redefining human/modern technology (an option when you talk to Greta), I'm almost... I dunno, concerned how "suddenly spaceships and first contact" could just over take what you're trying to do in r&d? It's weird cuz obviously this is a story about Asterion but the idea of magical r&d like this is super interesting and exciting, seeing the rules of the world and optimizing them is so my jam, too, haha.

And finally one for Boomer's Big Date, how bad has Miles had it that he couldn't see that Boomer wasn't very into him? Or well, so conflicted and wound up in his own thoughts that he wasn't being very fair to him? I get he's not super thrilled with not being in his field and being given kind-of a pity position by his friend as a glorified receptionist, but man, I dunno I'd give Boomer a second round based on what we saw, so I'm curious to know about Miles and how he thinks.

Are the Kobold characters still going to make an appearance?

Good to know, can`t wait for the update!

Preface: I haven't played enough of the game to where I noticed anything relating to the following request (I haven't played any other routes other than one where I make my own decisions just yet):

In hopes I can avoid spoilers, there's a character that your self-insert doesn't have a choice but to hate (as far as I can tell as long as you're nice to the bull). A pretty nitpicky question, but are you planning on incorporating options that reflect a nicer approach towards them? As mischievous as they are, I just can't help but like them. 🤪

On a side note, thank you for your incredible work ethic in creating this visual novel! I'm on the newer end of things, but I wish the best for you all the same. 🧡