So, releasing a new build is usually an exhaustive process, but we did things a lot differently for 0.4. Mainly it was smoother, the amount of content it had was less than our normal and it was easier polishing it up for publication. As a consequence of this somewhat easier build we, for the most part, had the energy and spirit to jump back into writing for Minoh after just a few days of break (as opposed to the longer, month-long breaks we usually take.) And that means quite a lot advanced since.

For starters, in large part thanks to all the great criticism and suggestions we got after 0.4 I pumped out a lot of content for Chapter 14. Right now it stands at 38k words. It will get a little more content because we need to stitch a few scenes together and tinker with some moments, but for the most part Chapter 14 is written and ageing a bit before we start editing.

Then comes "The Hinterlands II," which continues the story of P and Storm, the characters we met at the end of 0.4. Right now it's at about 15k words, it's coming along nicely.

While I work on The Hinterlands, Nemo and Kangarube have been working on the ending of the Ruthless Route. Yes, that's right, the Ruthless content is coming to an end. We had a very specific storytelling goal with writing the Ruthless content; Minotaur Hotel, after all, is a story about what Asterion went through and the disproportional power the player has to do both good and bad. If we only allowed the good then the work as a whole would be conceptually incomplete.

We haven't started Chapter 15 yet, but that will be the conclusion to Build 0.5. And outside of all this we have a lot of extra content I'm not counting here — 0.5 adds new guests and the capacity to hang out with any of the guests if they are free during the day, more lore drops, R&D projects such as building a gym, the list goes on. A lot of that's already written too, in large part thanks to Awoo, who's been focusing on optional scenes, and Kangarube who's responsible for a lot of poetry that, in-universe, is written by Asterion.

While we, the writers, were busy with new content nanoff started work on overhauling some of the backend code. This isn't anything you guys will see or notice, but a lot of work was done so the game runs better and with less bugs. Last night he did have some issues — his computer died — but he's already solving the issue.

So... It's been a productive month! Once we finish The Hinterlands it will be a somewhat straightforward last stretch and we can close Build 0.5. But, before you ask, it's not possible saying when we'll release 0.5 just yet. We have a lot of work to do and my job's been been keeping me very busy, so I can't exactly write as much as I'd like to.

Thank you for being on this journey with us. Working on Minotaur Hotel and seeing how it brings happiness was one of the best things this year afforded us. It is my belief that, in these trying times, art and creativity should do its best to bring joy and comfort to everyone — or, let's say, give a metaphorical home and place of recovery to those who are lost in this messy world. I hope we keep on accomplishing this mission.

To close it off, three final things:

First, we will probably push out a minor update in the next week or so. It'll contain bug fixes and a few more music tracks to substitute the Creative Commons ones we used.

Second, I'd like to pose a question; if circumstances ever allow, would you like the idea of Minotaur Hotel merchandise? If yes, what do you think would be a nice option for merch? We are curious to know what everyone thinks about this.

And third, under commission of Matydos, who's responsible for both theories in our forums and a Minotaur Hotel fanfic, nanoff drew a very festive Asterion. If you haven't seen him, here's the boy! 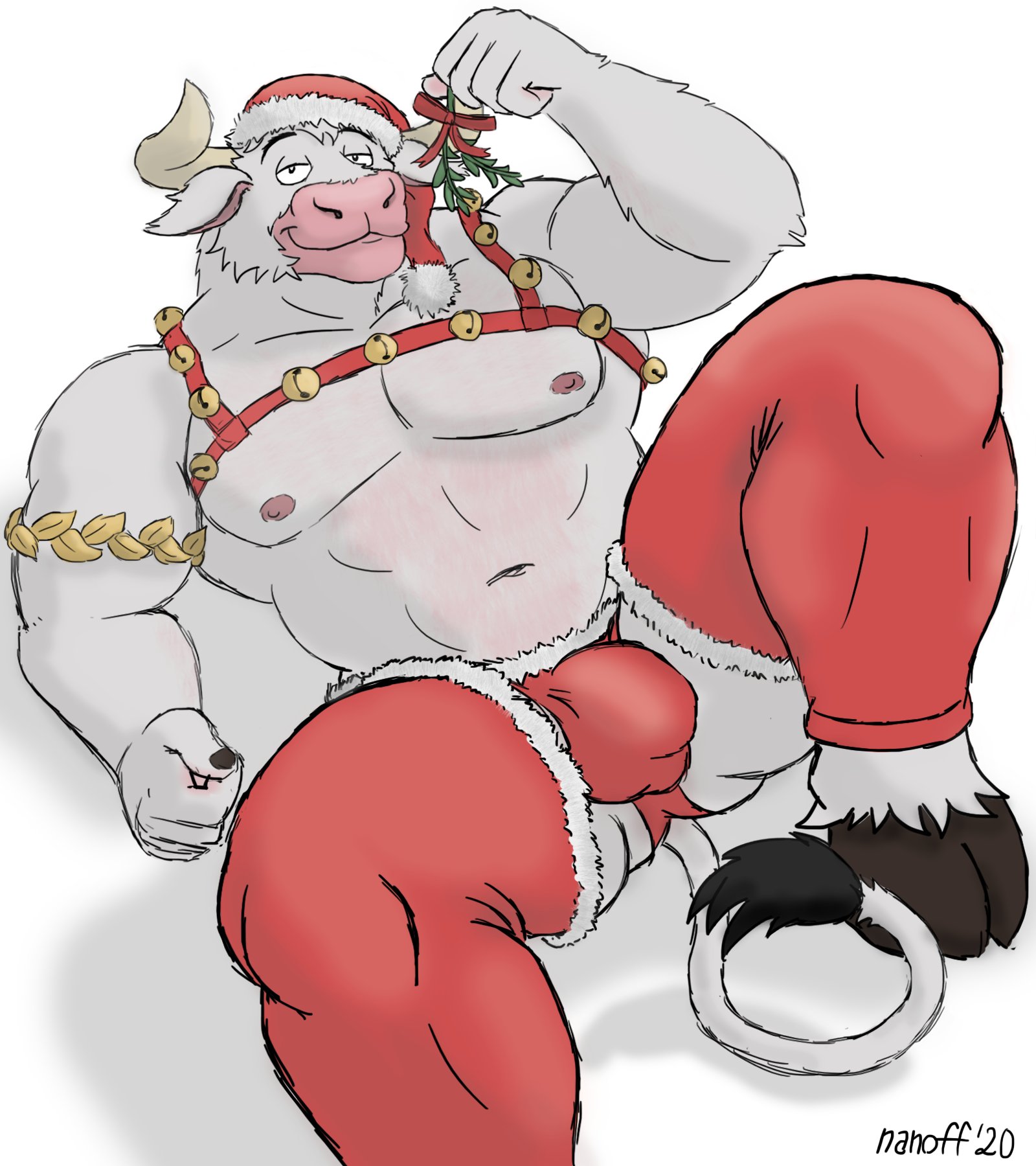 Merchandise would be nice! Maybe some buttons or shirts... Plushies would also be cool too, Get a chance to cuddle the moo irl. It may be a lot to compile or work with but a concept art book or even a collection of short comics might be cute too.

Happy New Year Minohteam and stay healthy! Thank you for making this wonderful, gripping, and sweet story, I can't wait to see what happens next for the big guy.

If your doing merchandise than I think plushies would make sense, also I want plushies

Will the Merchandises' shipping available over the globe?? And uhm.. plushies and clothing (hoodie, shirt) could be nice hehe.

And take time guys. The hardworks, arts and music with all the contents and alot of spaghetti coding, it worth the wait! 😂

Once again, thank you for creating this game. It's an imagination world, a home for more specifically, to anyone who feels lost from this messy reality.

And happy new year! I live accross the globe so yea it's 1St January 2021 here hehe.

Will the Merchandises' shipping available over the globe??

For now we are just checking if there is an interest and seeing what people think. If we go forward, yes, we'd want a decent degree of global shipping seeing as a good chunk of both our team and audience lives outside the US.

And thank you for the kind words. As horrible as 2020 was, I am glad our little story is bringing the good feelings we wanted to spread. I hope 2021 treats us better!

It isn't just any kind words, the truth speak for itself from the game you guys have made and the love from everyone! 😅

And yes, best wishes for you guys from 2021 too as well. And I'm really looking forward to the merchandises plan, hope it all work out well and bring abit of fortune (our support ❤️) for you guys.

I would love shirts and stuff maybe even shirts based on the ones in the game.

Thanks for all you do! This game is great and whatever you do is great man!!

Whatever you choose to do I HIGHLY recommend this series by Nerd City on Merch and Merch Design.

I have some things to say. From what I've seen on merch for Furry content there basically three 'tiers'. Easy, merch that's "cheap" and simple but don't provide a high level of "brand display"; your key chains, pins, stickers, etc. The Medium is the kind has a balance of price and display, probably items you'll make the most on; shirts, SFW Posters, etc. And finally the Hard tier, the tough sells, high brand display and quality but high price; Dakimakura, NSFW Posters, etc.

Now how would that fit into MinoH? I'm glad you asked.

1. Easy - As I said stickers of chibi version of the staff, and even memes are on the table, important items like the laurel and the lyre could also work. Keychains could work with the different backgrounds the player can pick as well as the important items. I suggest making it not too explicit that these items are from Minotaur Hotel; doing so can entice buyers the aren't comfortable about having furry merch on them.

2. Medium - That the shirts you can have Asterion wear can be made into merch, so could the Hotel uniform. It would also be nice to get a poster or postcard-like-thing featuring the characters in isolated/non-canon scenarios.

3. Hard - Dakimakura is pretty straightforward, right? You could have them feature the Asterion in different colors, then based on the popularity of that expand to the other staff members. What I said isolated/non-canon scenarios pics also applies here; naughty-style.

That's what I have to say. I WILL get merch if it does become a thing. And I ain't gonna lie, it'll be mostly to support all of your amazing work.

Can you repost the link to the Nerd City series? It seems like the link is broken and I can't identify which video on their channel you are referring to.