Nanoff here. May was, again, a VERY productive month for us, and we're getting close to wrapping up the build. As usual, here's our current progress:

So, something funny happened with chapter 16... it got way too big. Absurdly big. Like, Chapter 16 on its own was getting close to being as big as 0.3. We HAD to split it in two. Thankfully, those two insanely long chapters are finished and implemented in the VN, and that's where the bulk of this month's work went into. There's one small scene we need to write for it, but we're leaving it for last and it's not a big obstacle.

Wolf's scenes need a little more time in the oven, since the priority last month was editing and finishing what was Chapter 16 — on the meanwhile, 2/3 of his content is already in the game, the rest is half edited, half being written.

While waiting for the rest of the writers to work their magic, I added a little more side content here and there — some more Themba and Khenbish scenes.

Yes, the Ruthless Route has been finished for a long while now. Still, I'm putting it here to put the state of the whole build in perspective and how much of the work is already done.

Hinterlands 3 is a very big chapter where we take the role of P and explore "the hinterlands" with Storm, searching for clues to lead the pair to the Hotel. It's a special chapter where the player can choose which places to visit in a non-linear fashion, with linear daily scenes playing in between (as usual, with lots of variation to account for player choices). 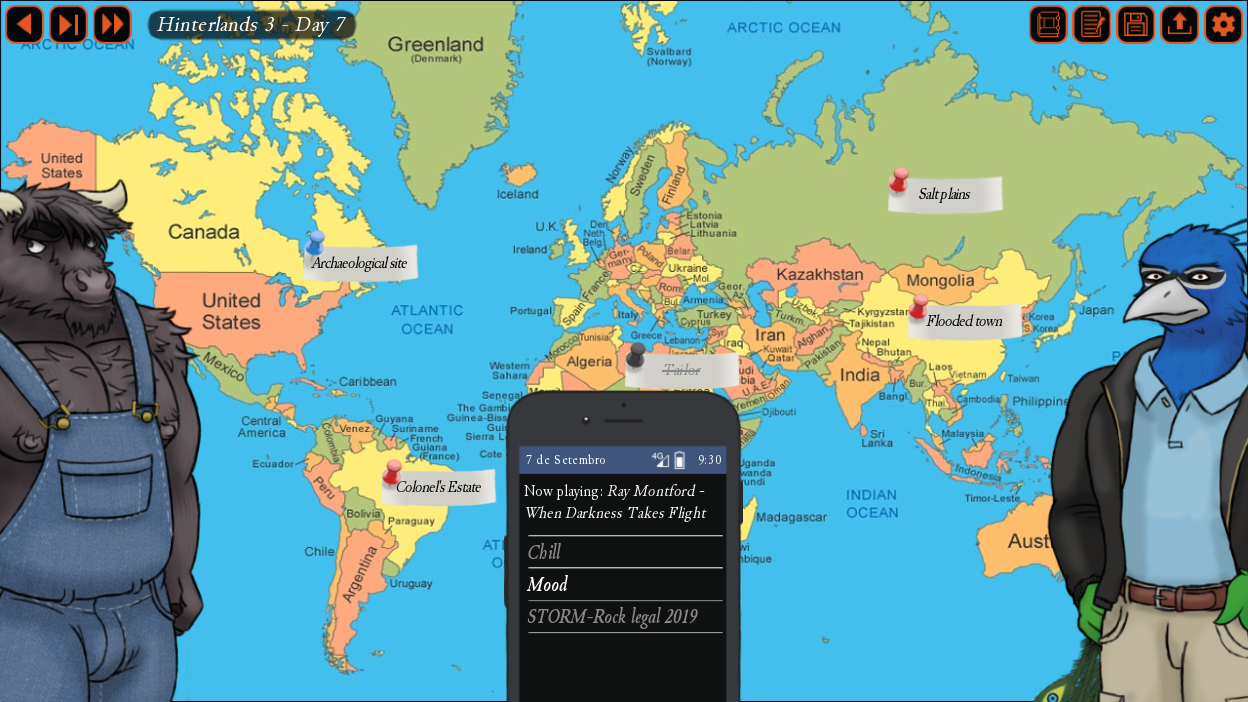 As you can see, the coding necessary for this part of the game is already done. Most of the art assets, too, we just need to finish writing the remaining locations (we're aiming for 10-12) before making the actual map background that isn't the first Google images result for "world map".

The scenes taking place in between exploration portions, where we get to know P and Storm a little better, are already written and being edited. These are the longest part of the Hinterlands chapters, and the exploration scenes for each location are about halfway done, so we're happy to say there isn't a lot of Hinterlands content left for us to write before we can move on to Chapter 18 and finish the build. 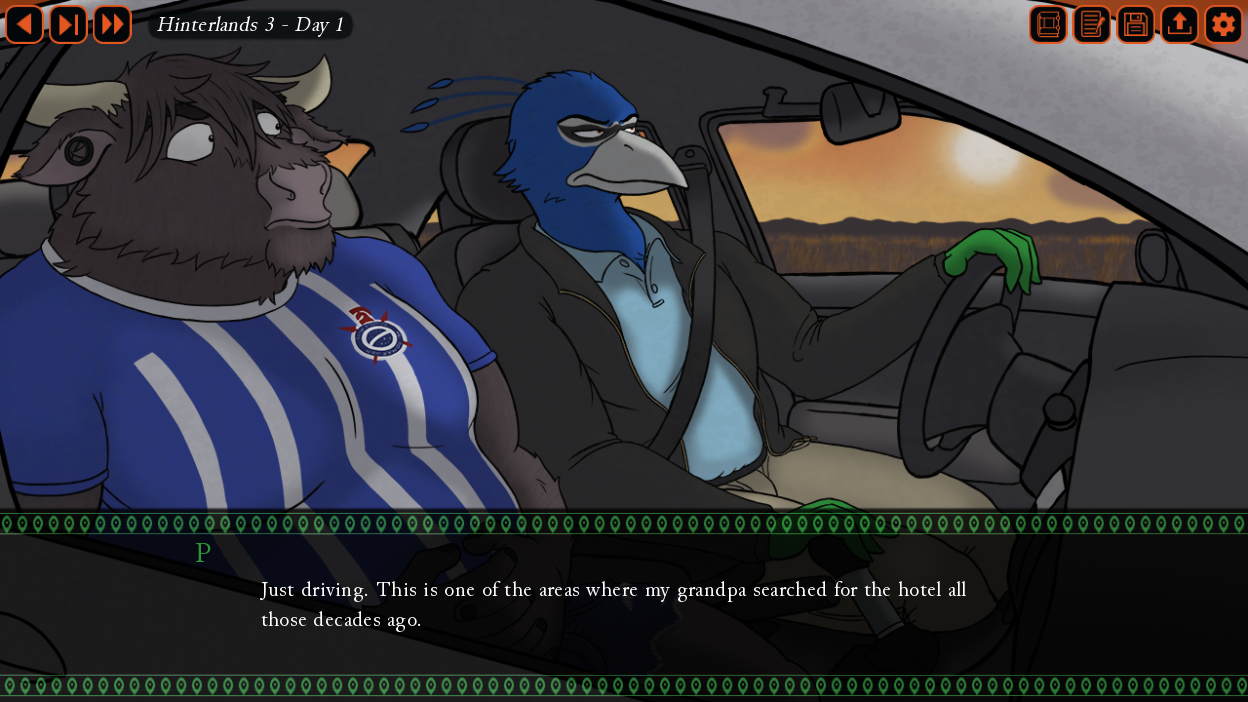 Hinterlands 4 and 5 are each just one scene long each — tiny in comparison. I mentioned we split Chapter 16 in two: this gives us an opportunity to make a small intermission in the main chapters, and cut back to see how Storm and P are doing.

Rest assured: we are NOT bloating the scope of the build by doing this (I feel like what we already have is ridiculous), we're just shuffling some content around, meaning these chapters will be on the shorter side.

So! How close are we to release? Getting there! The biggest hurdle we have right now is finishing chapter 18 — it's a chapter that we will try to keep on the shorter side (we really want to get this build finished), but still, as a culmination of the build's events, it needs to acknowledge the player's choices and have a satisfying payoff.

Once that is done, I think we will feel confident in announcing a release date. On the previous update we mentioned that we might get this out by July... I'd say it's still possible, but we don't want to rush this last part of the build. We'll keep you guys posted.

Now, before we leave, we wanted to get the word out about two projects.

First, a buddy of ours just published his first project on Itch! It's called Three Furry Encounters.

Three Furry Encounters is a collection of interactive short stories bound by the theme of meetings and confrontations. All stories were written beginner furry writer Cardigan on the software twine.
The stories are as follows:
Meeting with a unicorn is about finding an Anthropomorphic Unicorn bathing in the forest. Normally, one would wish for money, or fame, but his naked body makes you wish for something else instead.
In Dungeon of the Accursed Sword sword you'll have to escape dark ruins bearing a sword with a strange curse. Use your strength and cunning to deal with the place's denizens, and leave with a powerful weapon, or else...
The main character in Betting at the Club is in a race against time and his boyfriend to see who can get more partners in one night. Reading and understanding your "targets" will be crucial to avoid the punishment: "The Cage."

I'd also like to take the opportunity to recommend Nerus, which is a visual novel many of you may know already. The next update is coming out next week, on Friday the 11th. Give it a go if you like a good mystery!

As a slow reader I feel like this update will take me 2 or 3 days to finish lol I can’t wait!

I'm looking forward to playing more! It's been a fun time reading the SFW version of this on stream and I want to read more. Still, take as much time as you need to make sure the next release is where you all want it to be.

I don't think you'll be able to.

Mayhaps, but it'll probably be worth trying

That's a lot of work that got done and quite a bit to get excited about, good work all around team. Take all the time you need to polish the build.